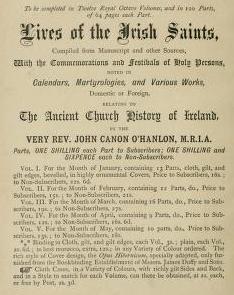 On August 2, the Irish calendars record the name of 'Lonan, son of Laisre' but without any further details as to when or where he flourished. The task of identifying this saint is not made any easier by the fact that there are eleven holy men who share this name in the List of Homonymous Saints. Canon O'Hanlon can thus only bring a very brief mention of Saint Lonan in Volume VIII of his Lives of the Irish Saints and notes that errors can be inadvertently introduced into the records, just to add to the confusion:

The Martyrologies of Tallagh  and of Donegal record a festival at the 2nd of August, to honour Lonan, son of Laisre. In the table appended to this latter record, the compiler sets down a Lonan, son of Laisre, at the 20th of August; but, the commentator remarks under it, that he is not mentioned in the Martyrology at such a date. Yet, as he is mentioned at August 2nd, the 20th of this same month is probably an error of some transcriber.