The Church at Killiney

March 6 is the commemoration of a group of County Dublin holy women, the Daughters of Leinin. Canon O'Hanlon's account of them can be found here but below is another nineteenth century account, this time of the church that still bears their name at Killiney. It was one of the places visited on a field trip of the 1890s to sites in the greater Dublin area. I have reproduced the accompanying figural illustrations from the Journal of the Royal Society of Antiquaries of Ireland. It would be interesting to know what more recent archaeological opinion has to say of the dating of the church and the claimed Syrian parallels for the engraved crosses found at this and other Irish sites. 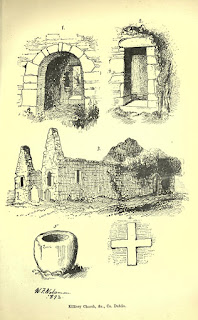 The name of this place, originally written Cill-Ingen, or Cill-ingen-leinin, as explained by Dr. Joyce, refers to certain daughters of Lenin, five in number. Though the father is said to have been a person of high position, and even of royal descent, we know nothing further of him, nor of his daughters, except that the latter are recorded to rank amongst the saintly women of Ireland. They appear to have flourished some time in the seventh century of our era. Whether the older portion of the existing ruin belongs to their time, or is of their foundation, it is not necessary here to discuss; but Petrie, in his great work on the "Ancient Architecture of Ireland," pronounced his opinion that it must be assigned to the sixth or seventh century. At any rate the church belongs to two distinct and widely separated periods, and, in an examination of the ruin as it stands, the student of Irish ecclesiastical architecture will find an interesting and highly instructive study (see fig. 3, p. 409). The original building, except wanting a roof, is still almost entire. It consists of nave and chancel connected by a semicircular arch, truly Roman in character, though the jambs of course incline in Celtic style (see fig. 1, p. 409). The extreme dimensions of the church upon the interior are 85 feet; the nave measures but 12 feet 8 inches, and the chancel 9 feet 6 inches, in breadth.

In our Journal, Part 2, vol. ii., Fifth Series, Second Quarter, 1892, will be found a description in detail of all the features of this venerable Cill, but a notice of its characteristic doorway may very fittingly be here reproduced: - It occupies a position in the centre of the west gable, is flat-headed, a splendid example of its class, measuring 6 feet 1 inch in height, by 2 feet in breadth, at the top, and 2 feet 4 inches at the base. In one respect this doorway is very remarkable, presenting, as it does, what Bishop Graves would style a "Greek cross," carved in relief upon the under side of its lintel (see fig. 4, p. 409). Only one other instance of the kind, as far as I know, can be pointed to, although at Fore, in the county Westmeath, Inismurray, county Sligo, and elsewhere, the sacred emblem may be seen sculptured over the opening on the exterior of the wall. A cross of the St. Andrew type occurs on the nether side of the lintel of Our Lady's Church, Glendalough, a structure, which there is reason to believe was erected by St. Kevin, himself, and in which, according to tradition, he was buried. In  Comte Melchior de Vogue's exquisitely illustrated work on the "Architecture of Central Syria " (a copy of which may be seen in our National Library) will be found engravings of a considerable number of crosses which occur carved over the doorways or on the friezes of churches and monastic buildings of that country. These crosses are wonderfully like those which we find similarly placed upon portions of several of our earlier, if not earliest, Irish churches.

A comparatively modern addition on the northern side of the nave, which appears to have been erected as a kind of aisle, is connected with the ancient church by several openings broken through the north side wall. It will be well to compare its architectural features with those of the original structure. (See fig. 3, p. 409.)

So much for Killiney Church; but before leaving, visitors should search for the rude and very ancient stone font (see fig. 5, p. 409), which probably still remains, though I could not find it when examing the ruins on a recent occasion.

Not many years ago, the time-stained teampull or cill under notice was approached from the main road by a rude "boreen" on the left-hand side of which stood a hoary thorn tree, which must have been several centuries old ; beside it was a carn, station, or altar, like those one sometimes meets with in the south or west. Both were considered by ancient people of the neighbourhood as very sacred. Alas! they have totally disappeared before the march of "improvements" as has also the original "Mur" or well-marked earthen rath by which the venerable cemetery was environed. Instead of this we find a hideous stone wall, built in the style usually adopted by the taste and feeling of Poor Law Guardians, who, all over the country, are destroying every trace of the picturesque which remained with our ancient parish churches.

NOTE ADDED IN THE PRESS.

Happily the font of Killiney Church has been found, and may be seen within the nave of that venerable cill.