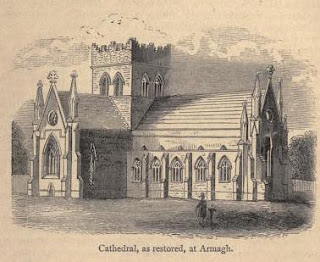 Canon O'Hanlon brings us details of a twelfth century abbot of Armagh commemorated on March 31 - Saint Machabeo. The notes to the Martyrology of Gorman provide him with this eulogy:


Gilla mo-Chaidbeo, abbot of the monastery of Paul and Peter in Armagh. The tower of piety and firmness, wisdom and knowledge, labour and prudence of his time.

Details of our saint are also to be found in the Irish Annals which give the year of his death:

Gilla Mochaibeo, Abbot of the monastery of SS. Peter and Paul at Armagh, a diligent and faithful servant of the Lord, died on the 31st day of March, in the seventieth year of his age.

As Canon O'Hanlon remarks in his account below, this makes Machabeo one of the latest saints to be recorded in the martyrologies of our country:

Although the oak-tree's trunk cease for a time to put forth branches and leaves, its roots do not fail to grow vigorously, while they extend in the earth. So when religious life appears diminished to the gaze of men, its hidden workings do not present less effective results, in the sight of God. St. Machabeo, or, as he is sometimes called, Gilda Machai-beo, means, "servant of the living Mochai;" and, Colgan, who has given an account of him, at the 31st day of March, supposes the name to have been imposed, in honour of St. Mochai, Abbot of Nendrum, who is related to have lived one hundred and fifty years, in Heaven, and in a state of repose. The present saint was born, in the year 1104, as we collect from the Irish Annals. He embraced the monastic profession, in the city of Armagh, and, in its former monastery, consecrated to St. Peter and St. Paul. He was probably a student, with the great St. Malachy O'Morgair, and under the tuition of that holy Abbot, Imar O'Aedhacan. It is also probable, that our saint succeeded this latter, by governing the monastery, after his death, in the year 1134 [recte, 1174?]. The office of Abbot he exercised—if this opinion be well grounded —during forty years, with the greatest sanctity. According to our ancient Martyrologies, he was the tower of Devotion and of Mildness in his time, the Ark of Wisdom and of Science, of Labour and of Prudence. He is also one of the latest saints, recorded in the Martyrologies of our country. He died, on the 31st of March, in 1174, having attained the seventieth year of his age. We find mentioned, on this day, in the Martyrology of Donegal, Machabeus,  i.e. Gilla Mochaidhbeo, Abbot of the Monastery of Peter and Paul at Ardmacha. The Bollandists briefly notice him, at this date, but they print, incorrectly, MCXXXIV., as the year for his death.

Email ThisBlogThis!Share to TwitterShare to FacebookShare to Pinterest
Labels: Irish saints, Saints of Armagh, Saints of the Twelfth Century