ST. NEACHTAIN, OF CILL-UINCHE, COUNTY OF LOUTH, AND OF FENNOR, ON THE RIVER BOYNE, COUNTY OF MEATH.

THIS holy pupil and near relation of St. Patrick had an early commemoration; for, his festival has been assigned to the 2nd of May, in the Feilire of St. Aengus the Culdee. In the Leabhar Breac copy we read:

"Saturninus' departure, unto Christ nigh
whom he went, with (the) death,
after a long sigh,
of Nechtan Patrick's pupil."

In the Martyrology of Tallagh, at this date, is also recorded, Neachtan of Cill Unchi, or Cell Funchi, in Conailibh, or Conaill, sometimes called Fidh Conaille. This latter place must have been situated, within the county of Louth; over the greater part of which the territory of Conaille Muirtheimhne extended. The Bollandists notice this holy man, at the present date. St. Nechtain, or Nectan, was the son of Liamhain, or Liamain, sister to St. Patrick. For this reason, he was called Mac Leamhua, or Mac Lemnai. His father was probably Restitutus, the Lombard. He was consequently a nephew to the great Irish Apostle, on the mother's side. It would seem, that the latter had charge of his early education and ecclesiastical training; for, it has been very generally stated, that St. Nectan, the Bishop, was a disciple of St. Patrick. According to the accounts about St. Nectain, he belonged to a place, known as Cill-Uinche, in Conaille-Muirtheimlme. Also, Fioneabhair-Abba was a locality associated with his memory. Here, it seems probable, was the chief place of his residence, when he had embraced a religious life. According to a gloss on the Feilire-Aenguis, Fionuabhair-Abba, or Findabair, was on the margin of the River Boyne, in Bregia. It may be Anglicized "the bright field of the river." At present, it is known as Fennor, in a small parish, bearing the same name, in the barony of Lower Duleek. Here, there is an ancient church, surrounded by a cemetery, which is still greatly frequented... 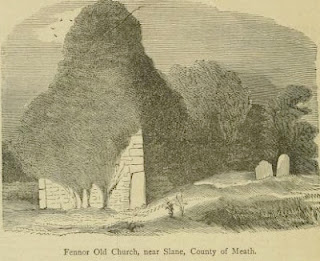 How long Nechtain lived here is not known. The Irish Apostle is stated to have been present, however, while he was dying. Nechtain then made his testament, it is said. He called likewise for a drink. St. Patrick had a vision, manifesting his glory in Heaven, before he died. If this account is to be received, St. Nechtain could not have reached a very advanced age, and he must have departed this life, about the middle of the fifth century. When his demise took place, his remains were deposited in Fennor. During the ninth and tenth centuries, some references to it are found in our Annals. After the Anglo-Norman invasion, we find this place to have been converted into a parish church. The present saint is patron, where his festival had been kept, on the 2nd of May and here, too, we are told, his remains lie. On this day was venerated Neachtain, as we find set down, in the Martyrology of Donegal.