Saint Erc Nasca of Tullylish, May 12 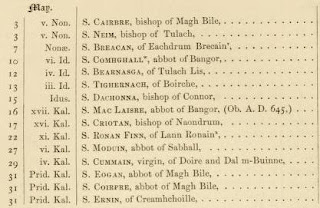 May 12 is the feast of a northern saint, Erc Nasca of Tullylish. The Martyrology of Oengus records his memory in its entry for today:

12. Cyriacus who was crucified,
who comes to us with three hundreds :
Ailithir, a beloved name,
with hallowed Erc Nascai.

whilst the scholiast notes:

Erc, i.e. of Telach lis in Hui Echach of Ulster.

Canon O'Hanlon has this entry in Volume 5 of his Lives of the Irish Saints:

Erc, or Ercus, Nasca, of Tullylish, County of Down. In the Feilire of St. Oengus, there is a commemoration of "sainted Erc Nascai," at the 12th of May. We are informed, that Earc descended, from the race of Art Corb, son to Fiacha Suighdhe. There appears to be some difficulty, not alone in determining the period when that saint lived, and what had been the station he occupied, among our holy personages; but, even, the individuality ofthe subject is doubtful, as those entries of our calendars in reference to him are conflicting. Thus, the simple entry of Nasc occurs, at this date, in the published Martyrology of Tallagh, and, in the Franciscan copy, it is nearly similar. Nevertheless, the Bollandists, quoting such authority, have Ercus Nasca de Talach-leis, on the same day. This place has been identified with Tullylish, in Lower Iveagh. This parish and that of Donaghcloney formed a territory, which was anciently called Clan-Connell. The parish of Tullylish was formerly part of the property of the Maginnis family, Lords of Iveagh; but, in consequence of the part taken by the head of that family in 1641, it was declared forfeit to the crown. In it, the remains of several ancient forts are to be traced; and, at Tullyhoa, there are extensive ruins, supposed by some, to have been those of an abbey. The River Bann passes, in a winding course, through Tullylish parish, the soil of which is fertile and highly improved, while the scenery is very beautiful. In the Franciscan copy of the Martyrology of Tallagh, at the 12th of May, we have the entry of Herc; while, immediately over it, and the proper name Nasc, we find the comment, i.e., in Tilaig Leis. This parish includes 11,707a. or 1p., and probably in the townland proper had been erected his ancient church. The Martyrology of Donegal mentions, that on this day, veneration was given to Herc Nasca, of Tulach-lis, in Ui Eachach Uladh. At the 12th of May, the Natalis of St. Erc, Confessor, in Ireland, is thus entered in the Kalendar of Drummond.