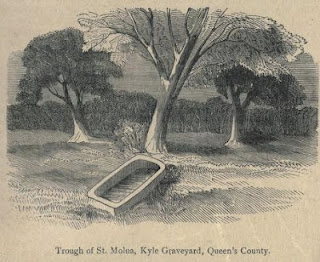 August 4 is the feast of the great Irish monastic founder, Saint Molua. Canon O'Hanlon has included in his account of the saint the story of a miracle at the time of Saint Molua's death involving another Irish saint, Munna of Taghmon:

The Angel of God was accustomed to make two visits each week—namely, on each Sunday and Thursday—to the holy abbot Munnu, of Taghmoon, in Hy Kinsellagh; but, he came not on the week when our saint died. Munnu had a revelation, that there was great rejoicing in Heaven, on account of our saint's accession to the angelic choirs. After the interval of a week, that angel again appeared. Then Munnu said, "Wherefore, servant of God, have you not come to me as usual, during the last few days ?" The angel answered: "Because on those days the venerable servant of God, Molua, son to Coche, went to Heaven. Therefore, the angels did not visit the saints of Ireland, as usual; for, they rejoiced together, on the arrival of Molua among them." Then, St. Munnu said :" Now doth it appear, he accomplished the will of God, in a manner superior to us all. But, go thou to the Lord, and learn for me, on what account the Almighty was more pleased with Molua's approach, that he should in consequence neglect to visit me." The angel obeyed. Within a short time he returned, saying: " This is the reply to thy question. The face of no man was ever suffused with blushes through Molua, for he was mild to all, and governed his monks with great piety and gentleness. With moderation, he drew them to the right path. However, rejoice, also; for you shall find a similar honour in Heaven, since you must endure suffering in this life, and to the hour of your death." On the following Thursday, Munnu was struck with a leprosy, which covered all parts of his body, and thus was he afflicted, for the remaining twenty years of his life.