August 18 is the feast of Saint Rónán, a name borne by a number of Irish holy men, most of whom are obscure. Pádraig Ó Riain's Dictionary of Irish Saints records that the name is derived from rón, a seal. Canon O'Hanlon, in his account below, covers the dearth of information about the August 18 Rónán by diverting us to the island of Iona. As he so often does, however, he builds us up to embrace a possible Scottish connection only to let us down by admitting that there is no actual evidence to connect our saint of the day with the Rónán commemorated on Iona. We do get a charming sketch as compensation though: 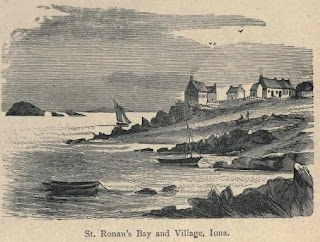 There are several saints bearing this name, included in the Irish Calendars; but of most, we have nothing left to determine their identity or period, or even the localities with which they were respectively connected. At the 18th of August, the Martyrology of Donegal registers a festival in honour of Ronan, having in like manner, no further designation. In Scotland, also, this name appears to have been known, and it is found as a compound word in local denominations. On the east side of Iona, there is an old church, Tempul Ronain, and a village at a landing place, called Port Ronan, a little to the south of the cathedral and chief group of antiquities there. Tempul Ronain was formerly a parish church, dependent on the Monastery of Iona. It had a nunnery connected, in which several prioresses are said to have been buried. Towards the close of the last century, the nunnery church was quite entire, one end of it being arched and very beautiful; then also stood the parish church entire, but tottering. This was a building about the size of St. Oran's chapel, and north-east of the nunnery, but inside of its enclosures. It is not known, however, to which of the saints named Ronan, this place had been dedicated.