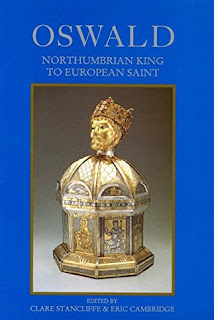 August 5 is the feast of the seventh-century Saint Oswald of Northumbria. Although not an Irish saint, King Oswald was the royal protégé of the Iona-trained Saint Aidan and was himself the recipient of an Irish religious education. Saint Oswald met his end at the hands of a pagan rival king and in his tribute to the royal martyr below, Irish Bishop, later Cardinal, P.F. Moran provides some very good reasons why the memory of this holy king should be cherished by the Irish. He also provides an account of the wonderworking relics of Saint Oswald, whose cult later extended beyond these islands into continental Europe:


...From the outset of his episcopate, St. Aidan was not without anxieties and sorrows. Above all he was overwhelmed with affliction by the death of Oswald, on the field of battle, in 642. This dire calamity fell upon the Northumbrian church and kingdom at the hands of Penda, the pagan king of Mercia. For two years war had raged between Northumbria and Mercia, and Oswald had been so far successful that he added the district of Lindsey, with its chief town of Lincoln, to his dominions. It was on the 5th of August, 642, that the decisive battle was fought, at a place called Maserfield, near the Shropshire town, which still commemorates Oswald in the name of Oswestry. The brave prince fell fighting for his religion and his country, as Bede takes occasion to mention, and "seeing himself hemmed in by armed assailants, he ended his life with words of prayer for his own soldiers: whence arose the proverb, God, have mercy on their souls, as Oswald said when falling to the ground." Another proverbial saying is recorded by Henry of Huntingdon: "The plain of Mesafeld was whitened with the bones of the saints." Thus perished, at the age of thirty-eight, Oswald, marked by the Church among her martyrs, and by the Anglo-Saxon people among its saints and heroes of most enduring fame. Ireland may well be proud of having trained to piety this first royal saint and martyr whom the Anglo-Saxon kingdoms added to the Calendar of Holy Church. The ferocious Penda caused the head and hands of Oswald to be cut off, and exposed on wooden stakes, but after some months they were rescued, and the hands were placed in a silver box, at St. Peter's Church, on the summit of the rock of Barnborough, whilst the head was consigned to St. Aidan, and interred with due solemnity in the monastic chapel at Lindisfarne. Of his other relics, we learn from Bede, that thirty years after the battle of Maserfeld the niece of Oswald brought them with great state to the Lincolnshire monastery of Bardney, which was in the Mercian kingdom, but the monks received them with coldness, saying that he was an enemy of Mercia, and left the wain, which had arrived with them in the evening, to stand outside their doors with a pall thrown over them. All that night a pillar of light, reaching from earth to heaven, shone over the remains, and was seen throughout the whole surrounding district of Lindsey. At the dawn of morning eagerly were the doors thrown open, the remains were reverently encased, and over them was suspended the gold and purple royal banner which had been borne before Oswald on the field of battle.

The spot on which King Oswald fell long continued greener and fairer than the ground around, and pilgrims, even from remote parts, flocked thither to pay the tributes of their devotion to God. Both places were indeed honoured, where he first planted the standard of the Cross entering on his career of victory, and where he ended his course, pouring out his life-blood for the cause of God. The latter, howrever, seems to have borne away the palm: "The monks of the great and magnificent Church of Hexham (writes Montalembert), went in procession every year to celebrate the day consecrated to Oswald at the site of the cross, which he had planted on the eve of his first victory. But the love and gratitude of the Christian people gave a still greater glory to the place of his defeat and death. Pilgrims came thither in crowds to seek relief from their sufferings, and had each a miraculous cure to relate on their return. The dust which his noble blood had watered was collected with care and conveyed to great distances as a remedy for disease, or a preservative from the evils of life. By dint of carrying away this dust a hollow was scooped out, of a man's size, which seemed the ever-open tomb of this martyr of his country. On seeing the turf around this hollow clothed with an unwonted verdure, more delicate and beautiful than elsewhere, travellers said that the man who had perished there must needs have been more holy and more pleasing in God's sight than all the other warriors who rested beneath that sward. The veneration of which his remains were the object spread not only among all the Saxons and Britons of Great Britain, but even beyond the seas in Ireland and among the Greeks and the Germans. The very stake on which the head of the royal martyr had been fixed was cut up into relics, the fragments of which were regarded as of sovereign efficacy in the healing both of body and of mind."

One of the miracles narrated by Bede is given on the authority of St. Willibrord, Archbishop of the Frisians, and happened when that apostolic man, "being as yet only a Priest, led a pilgrim's life in Ireland, for love of the eternal country." A certain Irish scholar, "a man indeed learned in worldly literature, but in no way solicitous or studious of his own eternal salvation," was reduced to the last extremities, having caught the contagion which then prevailed. Willibrord coming to him, and finding that he cherished a great devotion to the holy Oswald, said to him that he had "a portion of the stake on which Oswald's head was set up by the pagans when he was killed: and if you believe, with a sincere heart, the Divine goodness may, through the merit of so great a man, both grant you a longer term of life here, and render you worthy of admittance into eternal life. He answered immediately that he had entire faith therein. Then I blessed some water (adds St. Willibrord) and put into it a chip of the aforesaid oak, and gave it to the sick man to drink. He presently found ease, and recovering of his sickness, lived a long time after, and being entirely converted to God in heart and actions, wherever he came he spoke of the goodness of his merciful Creator, and the honour of his faithful servant." St. Willibrord added, that even in his distant mission among the Frisians miracles were wrought through the relics of Oswald.

I have dwelt thus on the memory of this holy prince on account of his being trained to piety in the Irish schools, his zealous co-operation with St. Aidan in sanctifying his people, and the devoted affection which he ever displayed towards his Irish masters. He bequeathed a bright example of Christian heroism to the royal families of the Anglo-Saxon kingdoms, and many were those who sought to emulate his perfect life. His festival was kept throughout England "with joyous and blessed gladness" on the 5th of August, and his name is entered in the Irish, Scottish, and Roman martyrologies on the same day. A foreign historian of England has well appreciated his true chararcter when he writes that "as his life was distinguished at once by activity and by a spirit of fervid Christian beneficence, so his Christian merits and his martyrdom rendered him a hero of the Christian world" and we may add with Montalembert, that, "crowned by the love and devotion of the people on whom he bestowed the blessings of peace and of divine truth, spending his life for its sake; gentle and strong, serious and sincere, pious and intelligent, humble and bold, active and gracious, a soldier and a missionary, a king and a martyr, slain in the flower of his age on the field of battle, fighting for his country and praying for his subjects. Where shall we find in all history a hero more nearly approaching the ideal, more richly gifted, more worthy of eternal remembrance, and, it must be added, more completely forgotten?"