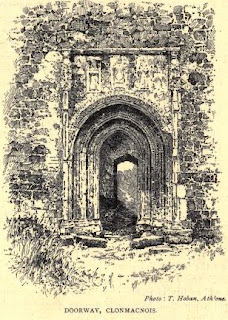 On March 6 the Irish calendars commemorate a 9th-century successor to Saint Ciarán at Clonmacnoise, Cairpre Crom. Described as a bishop, he features in a curious piece of apocryphal literature in which by his prayers and those of his community he rescues the soul of an Irish king's son from purgatory. Canon O'Hanlon in Volume III of his Lives of the Irish Saints cites the evidence for the saint's feast day on the various calendars and recounts the story of Cairpre Crom and the suffering soul of Maelsechlainn:

The days of this holy man were cast, in a dangerous period; for, the Danish and Norwegian invasions were then rife, over many districts, in Ireland. Yet, the heirship of sanctity did not depart from our island, and the present bishop was renowned, in his time. From various sources, Colgan and the Bollandists have legendary Acts of this St. Corpre, at the 6th of March, on which day we find him noted, as Carpre cruim [no Cruinn], in the Martyrology of Tallagh. The designation Crom, meaning "crooked," or "curved," had probably some relation to a personal deformity. Bishop Challoner commemorates him, at this date. So Marianus O'Gorman and Cathal Maguire, likewise, record his feast. We find entered, on this day, in the Martyrology of Donegal, Cairpre Crom, who was son of Feradhach, son to Lughaidh, son of Dalian, son to Bresal, son of Maine Mor, from whom descend the Ui Maine, of the race of Colla da chroich. This saint belonged to the posterity of Heremon. It is probable, he was born, in the earlier part of the ninth century, and that he belonged to the community, at Clonmacnoise. He succeeded to the Blessed Moeldarius, or Maelodhar, Bishop of this place, who died in the year 886. Cairpre Crom is styled. Bishop of Cluain-mic Nois, and head of the religion of the greater part of Erinn, in his time. Hence, we may infer the great eminence, as an ecclesiastic, he attained. The legend of Coirpre Crom, Bishop of Clonmacnoise, who died A.D. 899, and of Melaghlan or Malachy, Monarch of Ireland, who died A.D. 860, is contained in the Leabhar Breac, which belongs to the Royal Irish Academy. In the O'Longan Manuscripts, R.I.A., Dublin, there is an ancient prose legend, regarding St. Ciarain of Cluain Mac Nois and Cairbre Crom. This is likewise contained in Scholia, affixed to the Festilogy of St. Aengus. From this, Colgan infers the Acts of St. Carpre were formerly extant, and that this fragment may be deemed an excerpt, which the O'Clerys have thus abridged. It is stated, that to Corpre was shown the spirit of Maelsechlainn, son of Maelruanaidh, King of Erinn, according to an old legend. To their account, the O'Clerys append the following observation: A.D. 1022, on the 4th of the Nones of September,  Maelsechlainn died. On a certain day, when Cairpre was praying alone in his church, after vespers, he saw a coal-black figure, coming towards him, so that it stood in his presence. The bishop asked who he was when the apparition answered, that it was Maelsechlainn, son of Maelruanaidh, and he told him every kind of pain which he was suffering in Purgatory, with other particulars, besides the cause why himself and. his spiritual director had been thus punished. Then we are told, that the bishop undertook to make intercession for the king; and, he ordered certain priests to pray for the priest, to bring him from pains. The bishop announced, that he should himself pray for the king. They did so, respectively, and to the end of the half year. As Cairpre was at prayer, towards the end of that period, he saw the king coming towards him, and half-speckled; when, he returned thanks to the bishop, for what had been done for him. The king then implored him to do the same, until the end of another half-year. The clerics obeyed this request, while they fasted and prayed fervently, giving frequent alms, to the end of another half-year. Then the king came in a bright form towards Cairpre, and returned thanks to the holy bishop, for what he had done. The monarch told him, that he should go to heaven, on that day, and that the priest should enter it on the next day. Cairpre asked why the king should go before the priest. The king said, it was owing to the excellence of the bishop's prayers, and to the superiority of his over the priests' intercession. This was in allusion to twelve priests, who were at Chiain Mic Nois, at that time. Then, the king, giving thanks to and blessing the bishop, ascended into heaven, in his presence.

Among other things related, in the year 894, St. Cairbre Crom, with a Synod of Seniors, assisted at a convocation, held at Inis-Aingin, now Hare Island, in Lough Ree, on the River Shannon. At this time, the place itself was invaded, by the people of Connaught. A man was mortally wounded there, and the shrine of Ciaran was profaned. This bishop died A.D. 899, according to the "Annals of the Four Masters." An eloquent and a distinguished bishop of the Church, alluding to the words of a venerated and learned ecclesiastic, has remarked, when we hear of those marvellous things, concerning miracles and visions, the Catholic does not believe, that he is bound to accept them all, since those reported miracles have to be examined, upon the very same laws of evidence, by which any other facts are examined. Thus, in the legend of the present holy prelate, an old tradition is here set down, but solely as a curious illustration of our Irish mediaeval folk-lore implored.

I hope I have a Saint Cairpre to pray for me like this. I like the last bit - an exhortation to reason.