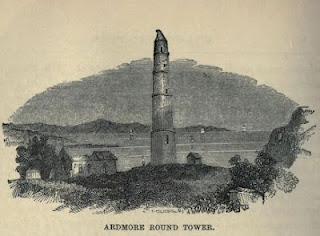 Today the Irish calendars record a hermit who is credited with being among the first Christian believers in Ireland, and who features in the hagiography of Saint Declan of Ardmore. Canon O'Hanlon takes up the story of Saint Mocelloc:

This saint, originally called Celloc—or perhaps Cellan- had the endearing appellative, mo, prefixed to his name, according to a custom of our ancestors, when they wished to express great veneration for a person. He was one of the first converts to our holy faith in Ireland, having flourished before St. Patrick's time, according to our ancient records. It is said, our saint was baptized, so early as A.D. 347 and in common with six other holy men, constructed separate cells in a place, called Magh-Scethe, which signifies,"the Plain of the Buckler," near the present site of Lismore. Mocelloc lived as a hermit, in his cell or oratory, according to tradition, many years before the Gospel had been preached in these parts, by Saints Declan, Ailbe and Kieran. In common with other religious eremites of the place, Mocelloc is said to have had a vision, on the night of St. Declan's birth, and that, in consequence, he predicted this infant's future greatness, by declaring that the country and people around should one day be subject to his spiritual rule. After this prediction, the Acts of St. Declan state, that seven just men were baptized, in the name of the most Holy Trinity; and, afterwards, having constructed cells, they lived there in a religious manner. From whom they received baptism, or at what exact time, we are not informed. On St. Declan's return from Rome, these seven eremites—among whom our saint was included—waited on him, and placed their cells, with their own persons, under his rule and direction. St. Declan's habitation was at Ardmore, at present, the head of a parish, in the barony of Decies within Drum, in the county of Waterford...

To conclude this account, the Martyrologies of Tallagh, of Marianus O'Gorman and of Cathal Maguire, at this date, [March 7] have inserted the festival of Mocelloc. Besides, on this day was venerated Mocheallog, as we read in the Martyrology of Donegal.