Saint Dunchadh of Iona, May 25 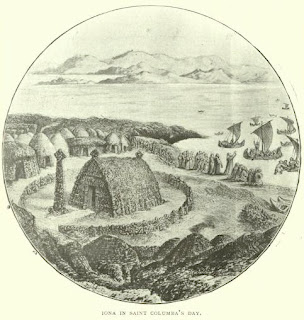 May 25 is the commemoration of Saint Dunchadh, an eighth century abbot of Iona, (Hi, Iae). He was of the same family as Iona's founder, Saint Colum Cille. Canon O'Hanlon has this account of Abbot Dunchadh's life in Volume 5 of the Lives of the Irish Saints:

IT may be observed, that the Columban monasteries were not so much hermitages or monasteries, in the usual sense of the word, as missionary centres, or rather as Christian colonies, whence the words of God went forth, until religion had permeated the existence of the faithful, and had taught them their obligations. In the early days of fervour, simple piety elevated the common incidents of their every-day life, while it sanctified even their duties and pleasures. It smoothed asperities, while it ennobled drudgery, and gave them a foretaste of heaven. Its influences should be the same today, but men and manners have changed since those eras, when the world had less attractions, and society had fewer allurements, to engage the various classes, that only found peace and happiness in religious seclusion.

The Martyrology of Tallagh, at this date, inserts Dunchadh Abbot of Iae, or Iona. In the "Feilire" of St. Oengus, this holy Abbot is commemorated, at the 25th of May. In the “Leabhar Breac” copy, the following is the text, with a translation into English, by Dr. Whitley Stokes:

“ To thee comes the feast of Johannes,
a loveable pillar of virginity.
Dionysius (the) sure (the) bold:
Dunchad of chilly Hi.”

In the Annals of Ulster, he is named Duncha mac Cinnfaelad. The Bollandists have a notice of this holy man, also, at the 25th of May. He descended from the race of Conall Gulban, according to the O'Clerys; and, this accords with the pedigree of the Sanctilogium Genealogicum and of Seluacius. St. Dunchad was the son of Kennfail, son to Moelcobh, son of Aid, son to Ainmire, son of Sedna, son of Ferguss, son to Kennfod, son of Connal Gulban, son to Niall of the Nine Hostages. He was of regal descent, for his paternal grandfather, Moelcobh, King of Ireland, died in the year 610, or according to other accounts A.D. 615. But, the virtues and merits of Dunchad made him still more remarkable; for, abandoning the world, he chose to become a monk, in the congregation, founded by St. Columba, at Iona.

Our saint was held, in great veneration, especially at a place, called Kill-lochuir, or Kill-chlochuir, on the southern confines of Ultonia, and towards the east, on the sea-shore. Here, he is said to have ruled over a monastery, and a community of monks, and to have been regarded, as the special patron of the place; while the fishermen near it invoked his intercession, and often attributed the safety of ships and sailors to his protection. His abode here seems to have been prior, to his departure from Ireland; and, it may have been, that his celebrity as a holy religious called him over to fill a more responsible position, in the monastery of Iona.

Scarcely a century had elapsed, after the death of that great coenobite, who sought the remote and desert island, where he established a renowned institute, when Dunchad leaving his friends and native country sought the shores of "chilly Hi," and perhaps landed in that very Port na Currech,— on the southern sea-board — where tradition still holds, that St. Columba first touched land, after he had parted from the coast of Tyrconnell. According to some writers, in the year 707, or in 710, St. Dunchadh was elected to rule over the community of Iona, on the death of Conmail. During Dunchadh's incumbency, there is an account of one Dorbene having obtained the cathedra in Hy, A.D. 713, and of Faelcu mac Dorben having ascended the cathedra of Columba, in the seventy-fourth year of his age, A.D. 716. It appears rather inexplicable, how Faelchu, son of Dorbene, or Dorbhe, Abbot of Iona, lived to A.D. 720, according to the "Annals of the Four Masters," and to A.D. 723, according to the "Annals of Ulster." Perhaps, the better way to account for it might be, to suppose our saint had resigned his dignity, before he had enjoyed it quite twelve months, as St. Dorbene Foda died, on the 28th of October, A.D. 713. The death of this saint is not recorded, in the Annals of Ulster, at A.D. 714, although there are many entries, agreeing with those of the Four Masters, for the previous year. It is likewise omitted, in the Annals of Clonmacnoise, at A.D. 712, although most of the other entries of the Four Masters, at A.D. 713, are there given. It must be remarked, that a discrepancy of one year exists, in these several Irish records. The only reasonable conjecture, which could otherwise be formed, is, that it was found necessary to appoint Faelchu as a coadjutor; although, owing to his being in the seventy-fourth year, at the time of his appointment, such a surmise appears somewhat improbable. The facts stated may not necessarily denote, that there was any schism, among the monks, during the lifetime of Dunchad; for, it may be a prior, or even a bishop, was meant, as distinguished from the abbot. Under Dunchad, the Columbian monks received the Roman Tonsure, and the mode of celebrating Easter, owing to the exertion made by a learned Northumbrian priest, named Ecgberet, or Egbert, who lived for a long time in Ireland, and engaged at his studies, in the monastery, called Rathmelsig, Rathmelsidhe, or Rathmilsige, the exact situation of which has not yet been determined. Here, however, he was distinguished for his great holiness of life, and for his knowledge of the Sacred Scriptures. He had designed taking his departure for northern Germany, when his former master Boisil appeared to him in a vision, and told him it was God's will, that he should rather go to the monastery of St. Columba. His remarkably persuasive and suave manners, joined with zeal and eloquence, when he left Ireland, induced the southern Picts to follow his instructions, and to abandon the old Celtic observances, in 716. Soon, afterwards, Ecgberet was able to persuade Dunchad and his religious congregation, at Iona, to adopt the Roman Tonsure and Paschal observances. Having continued for 150 years, at Iona, the Celtic practice was observed for the last time, on the Easter Festival of 715. The Roman rite thenceforward prevailed, and this caused great rejoicing, thoughout the universal Church, on account of that uniformity of discipline, which induced both clergy and laity in these islands to agree, on so important a celebration.

While ruling over Iona, we are told, that Dunchad was remarkable for his sanctity, and for the gift of miracles. He was also distinguished for his assiduity in prayer, and for that spirit of sublime contemplation, whereby he was enabled to repel all outward distractions. The "Chronicum Scotorum," records the death of Dunchadh, son of Cennfaeladh, Abbot of Hi, at A.D. 713. According to the Annals of Ulster, and of the Four Masters, St. Dunchadh was called to heaven, on the 25th of May, A.D. 716. Having been Abbot for seven years, he happily departed to the Lord, on the 25th of May, A.D. 717, according to the chronology of Tighernach. He died, so late as A.D. 736, Camerarius relates, and on the 24th of March, according to the same writer. The Martyrology of Donegal, on this day, registers the name of Dunchadh, son to Cennfaeladh, son to Maelcobha, son of Aedh, son to Ainmire. In that Irish Calendar, now preserved in the Royal Irish Academy, at the viii. of the June Kalends, or May 25th, the feast of this holy Abbot is set down. St. Dumhade is commemorated, in the Annals of the Cistercian Monks, and in the Circle of the Seasons, at the 25th of May. The Kalendar of Drummond, at this same date, enters the Natalis of Duncada, Abbot of Iae.

Email ThisBlogThis!Share to TwitterShare to FacebookShare to Pinterest
Labels: Irish saints in Scotland, Saints of Iona