Saint Mac Laithbhe of Donoughmore, May 20 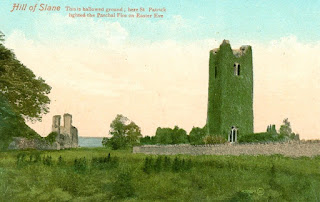 May 20 sees the commemoration of yet another obscure Irish saint whose only memorial is the recording of his feast day on the Irish calendars. In the case of Saint Mac Laithbhe 'son of Laithbe' even the recording of an associated locality is of no help as 'Donoughmore' is too generic a place name in Ireland to assist in identifying him, as Canon O'Hanlon explains:

At the 20th of May, we find a record of this saint, in the published Martyrology of Tallagh, as Mac Laithbhe Domnaighmoir. This latter word was the name of a place. Many localities, called Donoughmore, are known in various parts of our Island; so that it is difficult to discover that one, with which he had been connected. Marluithaes de Momech-mou is noted by the Bollandists, at the 20th of May, and for this feast, the Tallagh Martyrology is quoted;  but, we suspect, the reference has been taken incorrectly from that source. The Martyrology of Donegal,  on this day, registers Mac Laithbhe, of Domhnach-mor. as having been venerated.

However, on May 27 we find the feast of Saint Eithearn of Donaghmore. He is associated with Domhnach-mór-mic-Laithbhe 'the great church of the son of Laithbe' near Slane, County Meath. It has been established that churches which include the word Domhnach (Lord), in their names are among the earliest in Ireland and are linked to the mission of Saint Patrick. It seems that Eithearn is the son of Laithbe described in the church's title.  Slane is, of course, a locality with well-established Patrician credentials.  Pádraig Ó Riain, in his 2011 Dictionary of Irish Saints, suggests that as May 27 falls within the octave of the May 20 feast of Saint Mac Laithbe, that both days thus probably commemorate the same man, Eithearn, son of Laithbe.