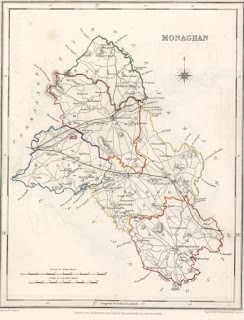 May 13 is the commemoration of an abbot of Mucnaimh, which Canon O'Hanlon argues is modern Mucknoe, County Monaghan. He is able to describe something of Saint Moeldod's genealogy, but otherwise there are few details. Pádraig Ó Riain, in his 2011 Dictionary of Irish Saints, has been able to trace how this otherwise obscure Irish saint was noted in the German martyrologies linked to the Irish foundation at Cologne. He also identifies him as one of the reputed victims of the Buidhe Chonaill ('the Yellow Pestilence') plague which claimed the lives of so many Irish saints in the 6th/7th centuries:

At this date, in the published Martyrology of Tallagh, we meet with the name of Moeilidoid; while, a nearly similar entry is in the Franciscan copy. The Bollandists have given some brief Acts of this saint, at the 13th of May. Father Godefrid Hennschenn was the compiler. We are informed, that St. Moeldod was a member of the great house of the Orgiel dynasts, representing the three Collas. It will be difficult, however, to determine the exact time, when he flourished; but, we may partially approximate to it, by following the genealogical tree of his family. St. Moeldod, or Maldod, was son to Eingin, son of Aldus, son to Fiach, son of Fiech, son to Eugene, son to Brian, son of Muredach Meth, son to Imchad, one of Colla Dacrioch's sons. We have few particulars to state regarding this saint. We are told, however, that he was Abbot of Mucmaimh, in Orgiellia, or Uriel; and that place has been converted by Archdall into Monaghan, said to have been anciently called Muinechan. The Rev. Dr. Lanigan asserts, that it was well known an old monastery stood at Monaghan—which he identifies with Mucnaimh—and, of this, Moeldod was Abbot, if not the founder. Such identification, however, is quite incorrect... Mucnamh sometimes written Mucshnamh— is now identified with Muckno, a parish in the barony of Cremorne, and county of Monaghan. Chiefly within its bounds is the beautiful lake of Mucno, with its soft and swelling shores richly wooded, and having pretty isles and islets to diversify its fine landscapes... It is situated, near to Castleblaney. The time, when this saint lived, has not been specified. The feast of a St. Maldod, Confessor, in Ireland, occurs, likewise, on the following day, May 14th. At this date, in his Scottish Menology, Dempster speaks of Maldod, Bishop, in Ireland, a Scot by birth, and a man distinguished for his great holiness, remarkable patience, and the influence of his virtuous example. As a proof of these assertions, he adds the letters M.C.; by which he asserts, the Carthusian Martyrology to be indicated as authority, Canisius, and Adam Walasser. The Bollandist writer, in the "Acta Sanctorum," had not seen this latter work; but, in the former authors, he found nothing regarding Moeldod's episcopacy, or about his Scottish origin. It is supposed, however, that this saint was identical, with an Abbot, who ruled over Muc-naimh monastery. His feast was assigned to this date, by Richard Whitford, in his English Martyrology. Also, on this day, the Martyrology of Donegal, registers the name Maeldoid, of Mucnamh, as having been venerated.

Note: The introduction to this post, first published in 2014, has been revised in 2022.