Saint Conval of Strathclyde, May 18 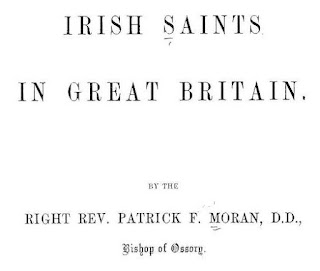 May 18 is the commemoration of Saint Conval, a disciple of the Scottish Saint Kentigern. The account below has been taken from Bishop (later Cardinal) P.F. Moran's 1879 work Irish Saints in Great Britain. It was a matter of some pride to the Bishop that Irish immigration into Glasgow had revived the memory of this saint:

One of the most illustrious of St. Kentigern's disciples was St. Conval, who inherited in an eminent degree the zeal and sanctity of his great master. He was the son of an Irish chieftain, and forsaking his country and friends, through the desire of winning souls to God, sailed to the banks of the Clyde, and enrolling himself among the clergy of St. Kentigern, soon proved himself a devoted missioner, and became a bright ornament of the Scottish Church. In many of the mediaeval records he is styled Archdeacon of Glasgow, and by his untiring labours he merited to be honoured as a second apostle of that great city. Each memorial of the saint was long cherished by the faithful to whom he ministered. The rock on which he landed on the sea-shore, and on which in after years he was wont to pray, was held in the greatest veneration, and several churches erected under his invocation attested the reverence and fond affection in which his hallowed memory was held. It is recorded that he visited his countryman, King Aidan, of Dalriada, and was welcomed by that prince with the highest honours. The purport of St. Conval's visit was probably to secure the aid of King Aidan for the religious works in which he was engaged south of the Clyde; and we are further told that, at that pious monarch's request, St. Conval passed into the Pictish territory, and there gained many souls to God. He also visited St. Columba, and seems for a time to have been associated with that great saint in his missionary labours.

He is venerated as patron at Inchinnan, in Renfrewshire, on the Clyde, about seven miles below Glasgow, and Boece writes that the saint's relics were still preserved there in his time. Near the ancient fort of Inchinnan there stood, till a comparatively late period, an ancient Celtic cross, erected in honour of St. Conval. Now its base alone remains. He was also venerated at Cumnock and at Ochiltree. The parish of Pollokshaws had also our St. Conval for its patron, although his feast was there kept in the month of May. "Its ancient church," thus writes the learned Cosmo Innes, "probably stood beside the castle upon the bank of the Cart. It was dedicated to St. Convallus, the pupil of St. Kentigern, whose feast was celebrated on the 18th of May." A church bearing St. Conval's name existed at Eastwood down to a comparatively late period. The burial ground attached to it is still used, and a portion of it near the still-flowing fountain that supplied the monks with water is set apart for the exclusive interment of Catholics, but no trace of the ancient church or monastery now remains. Near the burial ground there was a ruin known as the "Auld House," which, with its enclosure, was called "St. Conval's Dowry." His memory after having been forgotten for three hundred years has been revived in our days by the erection of a beautiful church at Pollokshaws, dedicated to God under the invocation of the Blessed Virgin and St. Conval...