Saint Siollan of Devenish, May 17 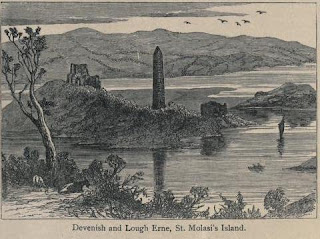 On May 17 we commemorate Saint Siollan, a seventh-century abbot of the monastery at Devenish Island, County Fermanagh. Canon O'Hanlon's account of the saint and his lakeland home begins and ends with a romantic flourish:

It is a sight never to be forgotten, when Lough Erne seems, as it were, holding her mirror to the relics around St. Molaisse's monastery. The round tower—simple, erect, and exquisitely tapering skywards—looks a fit emblem of hope, as the descending sun illumes its cap with golden light; while, down in the silent depths of the lake—less distinct, of a deeper and more dreamy shade—extends the reflection, as if veiling the mysterious past. The name Sillan, a Bishop—without any further designation—occurs in the Martyrology of Tallagh, at the 17th of May. We have Sillanus Episcopus, likewise, in the Franciscan copy of the Tallagh Martyrology, at the 17th of May. The Bollandists also enter his festival, on the same authority. In the Acts of St. Berach, allusion is made to a holy man, named Sillanus, who was miraculously restored to life, at a place called Rath-ond, but, of whose history little more seems to be known. A conjecture is offered, by Colgan, that he may be identical with the present holy man, yet this is hardly probable. The following identification is doubtless the true one, where at this date the Martyrology of Donegal records the veneration of Siollan, Bishop [of Daimhinis]. This has the English signification of "deer island." His place of habitation was on the historic and beautiful Island of Devenish, so picturesquely situated, on Lower Lough Erne, about two and a-half miles below the town of Enniskillen, and in the county of Fermanagh...

...The death of St. Molaisse, the founder of Devenish, is assigned to A.D. 563, and he was succeeded by St. Natalis, or Naal, the period of his demise not being stated. The next in succession, as revealed in our Annals, was St. Sillan. His term of incumbency seems assignable to the seventh century, and with the abbatial it is likely he exercised episcopal functions. We learn, that the present bishop died, on the 17th of May, A.D. 658, according to the Annals of the Four Masters. Under the head of Daimhinis, Duald Mac Firbis enters, Siollan, bishop of Daimhinis. Summer finds Devenish clothed in rank, luxuriant herbage. Except in the grey walls and the solitary hut of a herd, no trace of man is there to be seen. But, when the grass dies, and when winter has stripped this ancient home of its cattle, food, and verdure, the old gardens of the community can be traced, in many a boundary line. Even the presence of herbs and plants, which, though old in the soil, are not found in other islands of the lake, or on the surrounding hills, is indicated by the solitary habitant who acts as guide, and who lives upon this insulated spot.