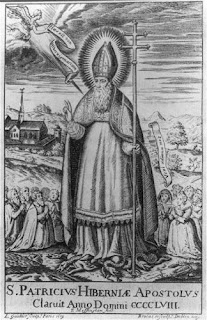 On May 19, one of the earliest surviving Irish calendars, the Martyrology of Tallaght, records the name of an Irish female saint, Ríceall, latinized as Richella. Canon O'Hanlon discusses three saints of this name, one of whom tradition says was a sister to Saint Patrick. It proves impossible, however, for him to definitively identify the saint Richella commemorated on this day. More recently, Pádraig Ó Riain in his 2011 Dictionary of Irish Saints, confirms that there are three holy ladies of similar name, whose root is the word rí, king, all of whom are difficult to disentangle. Canon O'Hanlon in his entry for the saint below lays out the evidence from the seventeeenth-century hagiologist, Father John Colgan:

In the Martyrology of Tallagh published and unpublished —we find this saint's festival set down, on the 19th of May. Marianus O'Gorman and Charles Maguire mention this holy virgin, likewise, in their Calendars, and at the same date. According to the accounts of ancient writers, St. Patrick had a sister bearing the name. But, as there were two other Richellas, in our list of Irish Saints, it may be difficult to determine the virgin, whose festival is this day commemorated. One of these was St. Richelia, the daughter of Attractus, and of King Leagaire's race. Her descent will be found, in the "Menelogium Genealogicum," cap. 3. The other was Richella, or, according to others, Richenna, called also Reynach, or Regnacia. She was daughter to Fintan, and sister to St. Finnian of Clonard, as may be seen in a Life of the latter, published by Colgan. Her Life will be found, at the 18th of December.

There was a certain church or monastic establishment, in the territory of Lugne, within the Connaught province, and there a St. Richella is said to have lived. Kill-Richille, in the diocese of Clonfert, was probably connected with the residence of a saint bearing this name; yet, it is not easy to determine that particular Richella—if indeed she was one among the three mentioned—who had been venerated in either of those places. In a list of St. Patrick's five sisters, the name Cinnenus is substituted for Richella, by Ussher; and Colgan found, likewise, in an old fragmentary vellum Life of St. Patrick, the name of a fifth sister to the Irish Apostle, as Cinnenus, and not Richella. But, as the form of the name Cinnenus is not applicable to a female, Colgan thinks we ought rather read, Cinne noem, signifying St. Cinna. Now, it would seem, that Richinne has the signification regia Cinne; wherefore, Colgan argues, it is possible, the doubtful word may be properly resolved into Richinne or Richella. The same researchful hagiologist tells us, he could not discover, whether or not Richella became a mother. It might come within the range of possibility, also, that Barbanus, or Banbanus, of Mag-slecht, and a kinsman of St. Patrick, had been her son; although, Colgan did not know, whether this relationship had been through a brother or sister, or in what collateral line. This, however, is only a very groundless conjecture; and, also, any attempt to represent our saint as a sister to the illustrious St. Patrick must prove equally futile. In the Irish Tripartite Life of St. Patrick, it may be observed, the saint left by him, over the church at Domhnach-Maighe-Slecht, is called Mabran Barbarus. The Bollandists notice the feast of Richella, an Irish virgin, at the 19th of May. Little is known, however, regarding her place in our ecclesiastical history.