June 22 is the feastday of a Saint Crunmael, son of Ronan, whom the Martyrology of Donegal links to a place known only as Berrech. The saint is an enigmatic figure but this does not deter Canon O'Hanlon's attempt to link him to a parish called Kilberry in County Kildare. This place contains a holy well at which a patron day or 'pattern' was celebrated on June 22 up until the middle of the nineteenth century. This led the good Canon to wonder if the celebration was originally held in honour of Saint Crunmael, but had become drawn into the wider rural celebrations of Saint John the Baptist's Feast on the evening of June 23 or on the day of June 24. Ultimately, the case for linking Kilberry to Saint Crunmael seems to be non-proven. The calendarist Duald Mac Firbis, writing in the seventeenth century, added the possibility that our saint was a tenth-century abbot of Beg-Eri whose death by drowning was recorded in the year 964. However, as the first record of our saint occurs in the Martyrology of Tallaght, written at the end of the eighth century or beginning of the ninth, I don't see how this could be the same individual. In his new Dictionary of Irish Saints, Pádraig Ó Riain notes that Saint Crunmael is known from a number of sources, which seek to locate him in different places. One does indeed locate him in County Kildare, but at a place called Kilcrow, another provides him with a son called Aodh Róin and has him at a church called Cluain Aird, not the great Clonard monastery of Saint Finnian, but possibly part of a parish of Saint Peter's in the Wexford barony of Forth. It thus seems that Saint Crunmael is yet another of the Irish saints whose precise identity is impossible to establish:

According to the Martyrology of Tallagh, at the 22nd of June, there was a festival for Crunmaeil mic Ronain. The Calendar of the O'Clerys states, likewise, that he was of Berrech. There is a parish, called Kilberry, in the barony of Narragh and Rheban West, in the county of Kildare. It borders along the River Barrow, lying about two and a-halt miles northwards from the town of Athy. A burial-ground now enclosed, within which interments yet take place is there, on the east bank of the River Barrow. The foundations of a very old church are in it, but scarcely traceable; for, they are overgrown with sloe-thorns, hawthorn bushes, briers, and old trees. The reed-grown course of the River Barrow passes by, and its bank formerly had been the western boundary of the graveyard, before it was enclosed by a rather modern stone wall.

Near the old cemetery, there is a celebrated well, called Tobbera, or Toberara. This beautiful and clear stream rushes with great force from beneath the roots of a very ancient ash tree, where it forms a broad yet shallow pool. Thence it issues, in a devious but short and rapid course, until it renters the Barrow. On the verge of this river, and on a bank somewhat elevated, Toberara finds its source. It is incorrectly stated, to have been dedicated to St. John. 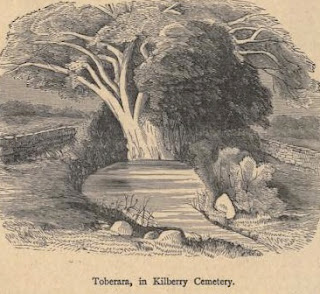 The writer was informed, by an old inhabitant, living in the vicinity, that a patron had been formerly held there, and always on the 22nd of June; but, this practice has been discontinued, since the year 1840. It should be a curious subject for enquiry to ascertain if this Kilberry could have been a comparatively modern denomination, derived from Berrech and Kill "church," as connected with St. Crunnmael. The circumstances of the local patron having been formerly held, on the 22nd of June, at least lends some degree of credibility to such a supposition. In Mrs. St. John's Poem "Ellauna," allusion is made to a pretty little island, named Teigh Berara, midway between Reban and Athy. We are told, there was a well sacred to St. John, at that place; and in the early part of this century, the ferryman on the River Barrow is stated to have had many pilgrims going across to perform pilgrimages there, on each Midsummer Day, June 24th.

In Kilberry, the ruins of two castles, which appear to have been remarkably strong in mediaeval times, yet remain; and those were intended to guard the English pale, on that side of the River Barrow. In the same parish of Kilberry, there is also another graveyard; but apparently, less ancient than the former, although nodoubt of very considerable antiquity. That unenclosed graveyard was much frequented for interments.The extensive ruins of an old church, with very thick well built walls, and mantled over with large clusters of ivy, may be seen within a large meadow-field, and near a high road, not very far from the River Barrow. A tall and square tower rises near the old church, and adjoining the east gable. Both the eastern and western gables of the church are yet very perfect. The graves—as observable in many ancient Irish churchyards —mostly lie on the south side of the burial-ground. The walls of the old building are now greatly delapidated. There are various fragments, apparently of old monastic buildings, and those also of considerable apparent solidity and importance, not far removed from the graveyard. An old castle rises on the other side of the road. Very fertile and improved land is near this site. Towards the north and west, the Killone and Stradbally hills, in the Queen's County, appear to great advantage, from a scenic point of view.

According to the Martyrology of Donegal, veneration was given, at the 22nd of June, to Crunnmael, son of Ronan. Under the head of Tamlacht, Duald Mac Firbis enters a Cronmael, abbot of Beg-Eri, as also bishop and lector of Tamlacht. He was drowned A.D. 964, at Tochar Eachdhach. It seems probable, however, that he was not identical with the present saint.