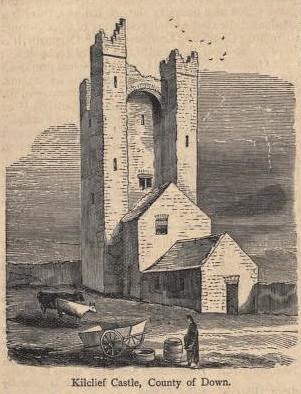 I begin this post on Saint Colman Finn of Kilclief with a caveat - June 2 is not listed as his feast day in the historic Irish calendars. The only basis for the commemoration of this saint on this day is the calendar of saints compiled by the scholarly Anglican Bishop, William Reeves, appended to his 1847 work, Ecclesiastical Antiquities of Down, Connor and Dromore. Unfortunately the author does not give any details of either the saint or his reasons for attributing June 2 as his feast day. The Catholic diocesan historian, Father James O'Laverty, dealt with Kilclief in Volume 1 of his four-volume  history, An Historical Account of the Diocese of Down and Connor, Ancient and Modern, but makes no mention of this particular saint. Kilclief, however, has left traces of its earlier ecclesiastical associations in the sources, which are summarised here. Today this locality is best-known for the ruined medieval tower-house, Kilclief Castle, which Canon O'Hanlon used to illustrate his account below. Finally, although we clearly cannot be definitive about this saint or his commemoration on this day, it is perhaps worth saying that modern scholarship inclines to the view that at least some of the myriad of Irish saints called Colman represented on our calendars may well represent local commemorations of the greatest Colman of them all: Saint Colum Cille (Columba), whose own feast will be celebrated exactly a week from today:

Reputed Festival of St. Colman Finn, of Kilclief Parish, Barony of Lecale, County of Down.

According to tradition Kilclief, a parish in the baronies of Upper and Lower Lecale, on the east border of Ulster, boasts of an early ecclesiastical origin. The church here is said to have been founded by St. Patrick while Eugenius and Niellus are held to have been its first ministers and his own disciples. The village, where it was built, stands on the sea-shore; while the surface lies, along the west side of the entrance s or lower part of Lough Strangford channel, and almost everywhere this parish consists of good arable land. North-west of the Protestant church here, and which now occupies the original site, there is a townland at present denominated the Glebe,  but consisting of three distinct old denominations, viz.: Drumroe, Carriff, and Carrowvannish.  Originally, it is probable, Kilclief had been a small parish, consisting only of 1,484 acres; although presenting on the Ordnance Survey Maps five detached portions, which, perhaps, were formerly chapelries, added to augment its income. A Hospital for Lepers had been founded here under the patronage of St. Peter. When allusion is made to this place, it is called Cill-cleithe, or Cill-cliath, in our Annals. The word signifies "church of the hurdles," probably in reference to its original construction. We find, however, that a daimliag, or stone church, had been here, in or before the tenth century, when it was burned. There, the parish church was dedicated to a St. Coelan, or Kelan. He was probably either Caylan, the founder of Neddrum, or Cillin of Achadh-chail. The original name Caolan admits of these varieties. He was probably son to Derinila, surnamed Cethuir-chich-each, of the Four Provinces, mentioned by St. Aengus the Culdee. In 1034 Cillchiath was annexed to the See lands of Down and, about the year 1178, John De Courcy confirmed the possession of Kilcleth to the bishop. About the year 1183, Bishop Malachi granted the church of Killecleth to the Abbey of St. Patrick. Near the site of the former church rises the old castle of Kilclief, in which the bishops of Down, at one time, resided. It seems to be a building of the fourteenth century, and it is still in good preservation, being well roofed. The castle and lands of Kilclief were an ancient See House and Manor, belonging to the Bishops of Down. In the middle of the last century, the castle was still entire, and covered with thatch. There was a chamber, in this castle, called the Hawk's Chamber and possibly, it may have been so designated, from the figure of a fowl, resembling a hawk, which was carved on a stone chimney-piece, in a room on the second floor, and on which was cut, also, in bas-relief, a Cross Patee.  The first floor is vaulted. It has two front wings, in one of which there was a stair-case, and in the other a stack of closets. Among the many holy men, bearing the name of Colman, and mentioned in our Calendars, the writer can only discover the name of Colman Fionn, venerated at the 4th of April or perhaps, Colman Ban, at the 19th of October.  We find a Colman Finn, an anchorite, whose death is set down, at A.D. 771; yet, we are not informed, if a date or a place has been assigned to him, or a rank among the Irish Saints. The writer is unable to find, on what authority, the Rev. William Reeves connects, at this day, the church and saint heading the present article; but, these are included, in our collection, resting on his authority.