We commemorate an early saint of County Kildare on June 21. Canon O'Hanlon brings us this account of Saint Diarmaid of Castledermot:

[Supposed to have lived in the Fifth and sixth Centuries]

There can hardly be a doubt, that the present saint flourished in the earliest ages of Christianity in our country. In the "Feilire" of St. Aengus, the name of this holy man is given as Ainle, which the commentator makes synonymous with Diarmait of Disert Diarmata Ui Aeda Roin. The former appellation is interpreted in English, "delightful his colour." We find the name Diarmait and Disurt registered in the Martyrology of Tallagh, at the 21st of June. More circumstantial are the following details. He belonged to the race of Fiatach Finn, monarch of Erin. In the Book of Lecan, the genealogy of Diarmaid of Disert Diarmada is given, up to Muiredach Muinderg. It need scarcely be observed, that Disert Dearmada is the present Castledermot, in the baronies of Kilkea and Moone, county of Kildare. Besides St. Aengus the Culdee, the Martyrology of Marianus O'Gorman and the Calendar of Cashel, also, commemorate St. Diarmit, at the 21st of June. While he is styled abbot of Castledermot, this saint is called bishop, in the Irish Calendars. He is said to have been founder of a monastery at Castledermot, about the year 500. The first name of this place was Diseart Diarmuda, afterwards called Tristledermot, and at present it is known as Castledermot. The name has thus been derived from the present saint. There are several ancient remains about here, among the principal of which are, a Round Tower, which is now used as a belfry to the Protestant church, with which it communicates, and beside which it stands, on the left angle of its gable, as you enter the church door. There is an ancient stone cross, which is perfect, and it stands on a pedestal, within a few yards of the Round Tower. The shaft of another cross lies south-west from the church; the arms of this cross, being broken off, are placed beside the shaft as the head-stone to a grave. Likewise, there is an ancient archway, that spans an entrance into the church. This is thought to have been a portion of the old monastery. This archway is near the pedestal of that cross, which has been last mentioned. Other interesting ruins of mediaeval religious houses are yet to be seen in Castledermot. 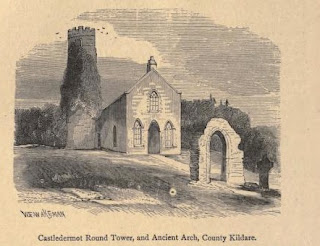 The Martyrology of Donegal, records him as Diarmaid, grandson of Aedh Roin, Bishop of Disert Diarmada, in Leinster. Likewise, under the heading of Disert Diarmada, Duald Mac Firbis records Diarmuid—descendant of Aedh Ron—a bishop of Disert-Diarmada, in Hy-Muiredhaigh, at June 21st. Little more seems to be known, concerning this holy founder of an establishment and of a town, both of which are celebrated in our ecclesiastical Annals.