We commemorate Saint Ciaran of Bealach-Duin, on June 14. As Canon O'Hanlon's account below records, this saint is associated with a holy well and with some miraculous bells which continued to ring out from the ruins of his church each Christmas Eve:

In the Martyrology of Tallagh, at the 14th of June, the simple entry, Ciaran, of Bealaigh Duin, occurs. According to the Calendar of the O'Clerys, this Ciaran descended from the race of Irial, son to Conall Cearnach, who is of the race of Rudhraighe, and who belonged to the progeny of Ir, son to Milidh. He was born probably before or about the beginning of the eighth century. He is thought to have been one of the authors, who wrote the Life of St. Patrick. He is designated the Devout, and he is distinguished as abbot of Belach-duin. This etymon means in English, "the road" pass of the fort. This was the ancient name of Disert-Chiarain or Castlekieran, near Kells, in the county of Meath. In Irish, it is now corruptly called Ister-Chiarain. An old church, yet not founded by the present saint, but called after him, is there situated on the Abhainn-Sele, or Blackwater River. According to a popular rumour, the present saint was a stone-cutter. Many legends are current regarding him, in the neighbourhood where he lived, but hardly any of them are of a reliable character. The old church yet remains. It is quadrangular, measuring forty-five feet six inches, by twenty feet. Most of the stones have been carried away, and the whole presents a melancholy picture of desolation. The interesting remains of five Termon crosses were here, and between four of these the church is situated. They were placed north, south and west of the ruin. The base of one was erected in a ford of the River Blackwater; but, the shaft, arms and top were removed, many years ago. The ancient crosses at this church sufficiently indicate its antiquity. Around one of these, on the north side, and placed in the Blackwater, cattle used to be driven by the country people, who believed that practice should preserve them from distemper. About a furlong's length, towards the west of the old church and cemetery, one of the most beautiful of the Irish holy wells may be seen, and shaded by a hoary ash tree, of surpassingsize and beauty. It springs from a limerock of considerable extent, and it falls into a small natural basin, at the foot of the tree. This is called St. Kieran's Well. There is a well, dedicated to St. Kieran or Ciaran, also at the Downs, about 3 miles east of Mullingar, in the county of Westmeath. In a little mound above it, there is a sculptured stone, partially embedded in the earth, and with a rude effigy carved upon it. According to a local tradition, a church or monastery formerly was there, but not a vestige of it now remains. The well is walled into a square upright opening, and it is held in great reverence by the people; but, whether it was connected with the present St. Kieran, or another bearing the same name, is uncertain, as the patron's feast is not known. 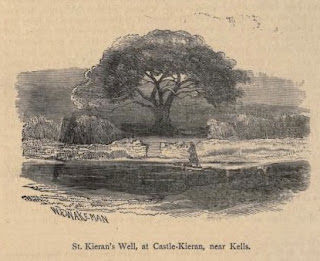 The death of our St. Ciaran, distinguished as the Pious, on the 14th of June, A.D. 770, or A.D. 778, is announced in the Annals of the Four Masters. The Martyrology of Donegal,at this same date, designates the saint as Ciaran of Bealach-duin. The Bollandists note St. Kieranus, Abbot of Belachduin, at 14th day of June, in their collection. A beautiful legend is current, that formerly the old bells of the church of St. Kieran used to be heard sounding at midnight, on every Christmas Eve. Those live, who assert, they have frequently heard them chime most distinctly. During the last century, the former parish priest of the place used to celebrate midnight Mass within the old ruined church; but, this practice has long been discontinued. While flocking to this Mass, "the miraculous bells" began to chime, and they only ceased at its commencement, according to popular tradition.