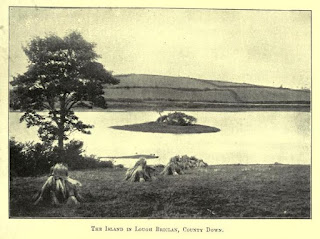 We are in County Down for the commemoration of an intriguing trio of saints, Nasad, Beoan and Meldan, on October 26. They flourished in a locality near Loch Bricenn, known today as Loughbrickland, which has a man-made island or crannóg dating back to prehistoric times. In the extract below from a paper of 1905, Canon Lett, a clergyman antiquary, summarizes what is known of them from the Irish calendars and gives an account of an ecclesiastical bell found there:

In the "Martyrology of Aengus," at the 26th of October, the gloss on the names Nasad, Beoan, and Meldan is "three saints from Britain, and are [interred] in one church, i.e. Tamlacht Menand at Loch Bricrend, in Iveagh, in Ulidia." And the " Calendar of the Four Masters " mentions but two names "Beoan Bishop and Mellan, of Tamlach Mellan, on Loch Bricrenn." These authorities would lead one to understand that the ancient church was on the shore of the lough; and though there is no trace of a church or churchyard, there is the name of the townland Ballintaggart, i.e. ' the priests' place.' Bounding the lough on the west, and adjoining it on the south-east, is the townland of Shankill, i.e. 'the old church.' …

…This interesting spot, which retains the name of Briclan, otherwise Bricrenn, has given the name of the chief, who resided here 2,000 years ago, to the lough and the modern village.

…A small handbell, of the usual square pattern of ancient Celtic Ecclesiastical bells, was found about the year 1835 at the site of the monastery; it passed into the possession of Mr. Fivey, who resided at Union Lodge on Lough Shark, now called, but erroneously, Loughadian. Mr. Fivey parted with the bell to Mr. Bell, engineer and artist, of Dungannon, who made a collection of Irish objects of antiquity; and, at Mr. Bell's death, it went, with the other curios, by purchase, to the Museum of the Society of Antiquaries in Edinburgh, where it, no doubt, is, though I have been unable to identify it. A man named Francis Mead, resident in Drumsallagh, who died fifteen years ago, and who had been present when the bell was discovered, described it to me as "an old, squared-shaped bell, of thin brass, one side being burned or broken out in part, and it had no tongue in it." A pensioner of the Royal Artillery, named David Beatty, who lived near the monastery, and Dr. Mc Kean, who was the dispensary doctor of the district, told me they recollected the finding of the bell, and they likewise described it as above.

The entry in the Martyrology of Oengus reads:

26. Nassad, Beoan, Mellan,
in every way I weave them together

and I would be most interested to know more of the story behind these three British saints and of how their names came to be woven together in the history of County Down.

Email ThisBlogThis!Share to TwitterShare to FacebookShare to Pinterest
Labels: Groups of saints, Saints of Down