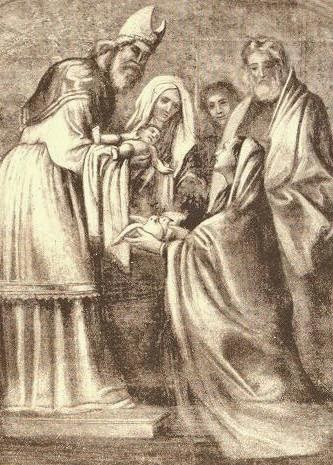 I was surprised to see that the entries for the saints of October 8 begin in the Martyrology of Gorman with this lovely verse in praise of Saint Simeon:

'Venerable, aged Simeon
who received great ample Jesus
on the branches of his white arms'.

A commentator has added in Latin 'ipse accepit eum in ulnas suas, Luc. ii. 28'. I could not find Saint Simeon commemorated on this day in any of the other Irish calendars, and as he is commemorated in the East on February 3, I wondered where the 12th-century Irish calendarist, Marianus O'Gorman, sourced this October feastday. The translator of the Martyrology of Gorman, Whitley Stokes, does not comment on this particular feast in his discussion of the Biblical saints found on this calendar but notes that 'Gorman, as a rule, agrees with the western martyrologies'. And indeed the Roman Martyrology at October 8 records: 'The same day, the birthday of the blessed Simeon, an aged man, who, as we read in the Gospel, took our Lord Jesus in his arms'.

I will close with the Song of Simeon in Irish, taken from the translation of the New Testament by Canon Coslett Quinn:

I liked this post very much because it shows both the way that the Irish felt themselves directly personally connected to the historical persons in the gospels and the very natural forms of expression in Irish. May the good God bless you for all the work you do. I know that the Saints of Ireland look down upon your labours with great satisfaction. I say a prayer for myself and for you to thses holy men and woman each time some one of them appears on my blogroll. I hope that others do the same.

Thanks for all your prayerful support, it is much appreciated. I have Saint Laurence on my list of saints to research and hope to make a post on his life in the near future. It was always my hope that people would be able to say a prayer to the holy men and women of our country, especially the more obscure and neglected ones!