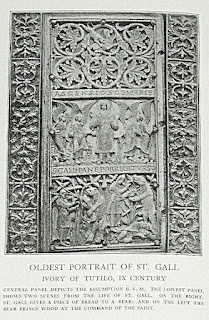 October 16 is the feastday of the Irishman hailed as the 'Apostle of Switzerland', Saint Gall, who gave his name to the Swiss canton of Saint-Gallen. He was a contemporary of the great Irish missionary saint, Columbanus, and both were students of Saint Comgall's monastic school of Bangor. Gall was one of those who accompanied Columbanus on his endeavours to evangelize Europe and shared many adventures with him in the territory of the Franks, but it appears that the two parted on less than happy terms, when the indefatigable, if irascible, Columbanus, wanted to journey on to Italy. Below is an account of the parting of the ways from the ninth-century Vita Galli of Wettinus:

On their journey, however, all the athletes of God were struck down with fever; illness prevented Gall from continuing on his way. While Columban was preparing to leave, Gall threw himself at his feet and said that weakness prevented him from moving on. The holy man, thinking a little mockery might make his friend decide to accompany him, said, 'If you do not wish to share in my work, you shall celebrate Mass no more as long as I live'. He decided, however, of his own free will to remain and to accept the condition... All this happened, I think, according to the will and the providence of God, so that Gall, whom he had chosen, might lead the people of that country to eternal life.


Gall remained in Swabia and he lived as a hermit near the source of the river Steinach. He reposed on October 16th, 646. In 720 the monk Othmar built an abbey on the site of the holy hermit's cell, which was the origin of the town of Saint-Gall.

Columbanus journeyed on to Italy, where he founded the famous monastery of Bobbio. According to some accounts, he and his former disciple Gall were reconciled before the end. On one dark night Gall arose and instructed his deacon to prepare the altar for the celebration of the liturgy, as it had been revealed to him that his old master Columbanus had died. Soon word arrived from Italy that Columbanus had ordered his staff to be taken north to Gall as a sign of forgiveness.

Below is an account of one of the miracles of Saint Gall, taken from Walafrid Strabo's Libellus Secundus de Miraculis S. Galli Confessoris, written before 836. For scholar, J. M. Clark, it is evidence of the presence of Irish monks at the monastery of Saint Gall during the ninth and tenth centuries, bearing in mind that at this time the Irish were referred to as 'Scotti' or Scots:

And once certain newcomers of the nation of the Scots, in whom the habit of wandering has become almost a second nature, left at this monastery one of their fellow-travellers, who was afflicted with many diseases. When he had stayed here for some days, and had daily prayed, with implicit faith, for the healing of his infirmities,one night he saw in a dream an old man of venerable aspect standing beside him. He asked the stranger who he was, and learnt that he was St Gall. And forthwith he said to him: "Thou seest, 'domine,' that I, whose body is quite wasted away, daily wait for a manifestation of thy powers. Do not, therefore, delay further in what I believe thee to be about to do. I know I have been preserved all the time to this end that, just as thy virtue is revealed far and wide to these barbarians, in the same way the splendour and fame of thy merits may also be made known to the men of thy race."

The pilgrim was healed, and Strabo asserts that he was still living at the Abbey and was leading a holy life.