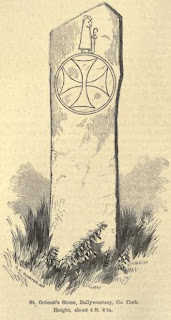 February 11 is the feastday of Saint Gobnait (Gobnet, Gobnata) of Ballyvourney. A previous post on her life can be found here. Below is a charming account of the saint and her locality, taken from the pioneering work on Irish pilgrimage by Daphne Pochin-Mould:

St. Gobnet is one of many early Irish saints about whom there is no written record, only a continuing and deep love and devotion amongst the people of the countryside that she had travelled, and a handful of traditional stories. Her connection with St. Abban puts her in the 6th century but there is no further definition to be had about her dates. She was on the Aran Islands and founded a church there and the islanders still honour her on her day, February 11th. The tradition is that she came seeking shelter on the islands from some enemy in Co. Clare. But she was not to remain there permanently, for an angel appeared and told her that that she must go and seek a place where nine white deer were grazing. There she would found a convent and settle permanently, there she would die and there would be, in the Irish phrase, the ‘place of her resurrection’.

So Gobnet went back to the mainland and travelled over southern Ireland seeking the white deer. There are a number of old Celtic church sites and holy wells bearing her name, and most of these still seem to be venerated and visited. They include a site at Dungarvan, in Co. Waterford, and at Ballyagran near Charleville, the Kerry sites of Dunquin, looking out to the Blasket Islands, and of Cahirciveen. Not till she came to Clondrohid in Co. Cork did she meet any deer, but there she found three white ones grazing. Here is a special stone still venerated in her name, Cloch Ghobnatan, Gobnet’s stone, and it is traditional to carry a coffin deiseal once round this before the burial takes place. Next the saint met six white deer, at Ballymakeera, the next hamlet to Ballyvourney; finally at the latter place she found the full complement of deer.

St. Gobnet’s little settlement is in a place where one might indeed expect to find nine white deer grazing. The River Sullane, a tributary of the Cork Lee, takes origin in the moorland and rock of the Derrynasaggart mountains, flowing from them into a deep but spacious valley, its flanks checkered with fields, broken with woodland and coppice. Even today one can realize the kind of place it was in the 6th century, little fields amongst trees and grassy stretches of sunlit turf amongst the woods of birch and hazel and oak, where one would come upon deer grazing peacefully. Gobnet’s convent was high up on the slope of the valley, set well above the river, amongst this bosky country where the rock begins to show through the grass, and the fields end against moor and wood; from it there is a great outlook down the river valley.

There are some pleasant traditions about St. Gobnet and her nuns at Ballyvourney. How a robber tried to build a castle in the glen and how Gobnet resisted him, throwing a stone ball at his constructions as soon as he had begun them and knocking them down. The ball returned to Gobnet of itself; eventually the man tired of his fruitless labour and went away; but the miraculous stone ball is still venerated at Ballyvourney, preserved in a niche in the wall of the old church. Again, another robber came to drive off all the Ballyvourney people’s cattle. St. Gobnet was a great bee-keeper; she turned the bees onto him and he, not unnaturally, fled, leaving behind his prey of beasts. One account makes the rather unnecessary addition of each bee turning into an armed soldier for the attack. St. Gobnet is always represented in art with her bee skip, or beachaire.

The saint also stopped the plague spreading into the district, by her prayers; when illness did come she was a good nurse. One of her nuns was sick and Gobnet took her to a sequestered glen to recover, praying God that no noise or disturbance would worry the nun. Ever since not even the loudest thunder has been heard in this place. The saint was also noted for her kindness and generosity to the poor; when she was very young she was taking meat to give to the poor. She met her father, who objected violently to these practices, and demanded to know what she was carrying. She was forced to produce her basket, but it was full of flowers into which the meat had been miraculously changed.

Out of the traditions something emerges; the little community of women on the hillside, with their bees and their garden and a little farm; Gobnet helping the Ballyvourney people and curing their sicknesses. The convent is no longer there but the saint’s help remains, and to ask her assistance the crowds still come both on February 11th and on Whitsunday, when a second big pilgrimage takes place…..