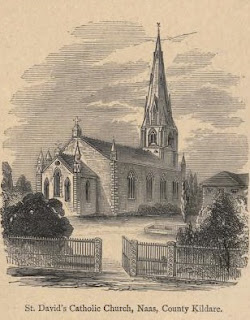 March 1 is the feast of Saint David, the patron of Wales. Ireland, however, can also claim to have a long tradition of devotion to the Welsh patron and the parish church at Naas, County Kildare, is dedicated to Saint David. As diocesan historian, Father Michael Comerford explains, the dedication can be traced back to the influence of Cambro-Norman settlers, many of whom had links to the Pembrokeshire area:

The parochial church of Naas, since the Norman invasion, has been dedicated to St. David. It is supposed that the present Protestant church occupies the site of the church of the olden time, and that portions of the walls of the ancient structure are built into the modern church. There are strong reasons for judging that the parish church of Naas, in the early Christian era, was dedicated to St. Patrick. The Egerton Tripartite (quoted by Father Shearman), recounting the miracles of our national Apostle makes mention of the Dominica of Naas. This would, in itself, go far to prove that the original church was under the invocation of St. Patrick. Dr. Joyce (Irish Names of Places), would deduce additional proof of this from the fact that the great fair of Naas was (until a few years ago) held on St. Patrick's Day. It is conjectured that William Fitzmaurice, on whom Naas was bestowed by Henry II,, finding the old church of St. Patrick either ruinous or destroyed, rebuilt it, and on the occasion, substituted St. David, the patron of his father's native country, Wales, as the Titular. (Loca Patr).

Canon O'Hanlon, who has a lengthy entry for Saint David in Volume III of his Lives of the Irish Saints, also comments on the link between Saint David and the patronage of Naas, starting with the old parish church and then moving on to the building of the Church of Our Lady and Saint David, which commenced just two years before Catholic Emancipation:

"It was only natural, the ancient Welsh colonists should desire their chief patron, St. David, to be regarded as titular of Naas, in Ireland. Accordingly, at an early period, no doubt, such an honour awaited the church first raised there, to the invocation of this beloved and venerated patron. The site of the old church of St. David, at Naas, is in the centre, and on the east side of the town. It is popularly agreed, that the present walls of this church, with an ancient tower on the south-west end, are repaired portions of the old parochial church of St. David. There were three chantries formerly within it, viz. : that of the Holy Trinity, of St. Mary, and of St. Catherine. The Church of St. David is surrounded by a cemetery, where Catholic families still continue to bury their dead. Some remains of old tombs and armorial bearings, carved in stone, are found within this graveyard enclosure. The soil seems to have accumulated to a considerable height over the foundations, owing chiefly to interments continued for centuries past. No very ancient monuments, however, can be found there at present.

The old parish church, now appropriated and re-modelled for the purposes of Protestant worship, appears to rest on a part only of its original foundations. Near the side walls, traces of extension may be discovered, so as to indicate, that it had probably been cruciform in design. The foundations of one lateral transept are visible. It was known as the Lady Chapel. Another transept probably corresponded with it, on the opposite side, where a poorly-designed porch now extends. Internally, as well as externally, it is an easy matter for the antiquarian and architect to discover alterations, from a much purer type of building. Hardly in any one instance can the more recent modifications be regarded as improvements. The walls are of extreme thickness. The interior contains some tablet memorials, a rich stained glass window, an organ, &c.; but, it is deformed with a cumbersome gallery, high pews, and other unsightly obstructions and designs.

The present building has evidently undergone many alterations. It is near the site of an old castle, which, in a great measure, has been modernized, and at present serves to form a rectorial residence. It is still known as St. David's castle. The adjoining grounds and accessories are ornamental. Not far removed, an endowed grammar school is entered, through the cemetery gate. Where the steeple once stood, a huge unfinished tower was erected, nearly one hundred years since, by an Earl of Mayo. It has within it, on a slab, the following inscription :—" Ruinam invent, Pyramidem reliqui, Mayo." ["I found a ruin,"—the old Catholic erection then in ruins.—"I left this steeple in its place, Mayo." In the tower, is a bell, bearing the following inscription: "Os meum laudabit Dominum in Ecclesia S. Davidis de Naas." ("My mouth shall praise the Lord in the Church of St. David of Naas.") R. P. W. C, 1674.] Some time after the Catholics were deprived of this church, they built another, where the Moat School now is, and which served until the present building was erected.

The first stone of this commodious edifice was laid, August 15th, 1827.This church is dedicated, under the joint patronage of our Lady and of St. David. The church itself is divided into nave and aisles, by two rows of columns, the nave being 30 feet wide, and the aisles 15 feet, each. The total length, from the eastern wall, behind the high altar, to the western wall of the tower, is 138 feet; and, the height of the nave to the ridge plate 52 feet, a good and beautiful proportion. Forty years after the opening, the interior began to be finished. About twenty years after the opening, a steeple, modelled after that of Ewerby, in Lincolnshire, set up in the 14th century, was commenced, and was finished on the last day of the year 1858. It is 200 feet high. The style is what is called the transitional; that is, what prevailed between "the early English" and "the decorated" periods. The tower consists of three stages. The Priory of Great Connell, within a few miles of Naas, was dedicated to our Lady and to St. David. Canons Regular of St. Augustine occupied this religious establishment, and the Prior had a seat in the Upper House. Great Conall was founded by Meyler Fitz-Henry, Lord Justice of Ireland, in the beginning of the thirteenth century. Although St. Kieran of Clonniacnoise seems to have been the first patron saint of Ardnurcher, a parish located partly in the barony of Kilcoursey, but chiefly in that of Moycashel, county of Westmeath; yet, St. David—most likely the present one—has been patron saint for many centuries back, and there is a holy well dedicated to him, at Ballinlaban. It is still much frequented. In Mulrankin parish, county of Wexford, a patron was formerly held, on the 1st of March. Probably this was in honour of St. David. A Ballydavid Townland and Head are to be found, on an extremely remote shore of western Kerry, in the barony of Corkaguiny, not far from the old ruined church, in Kilquane parish".

Canon O'Hanlon concludes with a final reminder that there are good reasons why the Irish people should not hesitate to seek the intercession of the patron of Wales:

"It must always constitute a pleasing and truly Christian state of society,to find international kindness and courtesies, with charitable and religious offices, exchanged between the people of different countries. Such kindly relationship appears to have prevailed, on the part of our Irish ancestors and the Cambro-Britons, except on rare occasions, when ambitious, adventurous, and unprincipled leaders conducted marauding expeditions, against those exposed to their predatory incursions. The bad passions of men, thus mutually excited, led oftentimes to bloody reprisals. Nor can we doubt, but the period and contemporaries of St. David witnessed many of those devastating raids. Yet, it is consoling to find, that the holy men of Hibernia and Cambria maintained an intimacy, strengthened by bonds of mutual friendship and religious associations, even from opposite shores. Intercommunication by sea voyages brought Menevia within easy reach of Irish students, many of whom were proud to acknowledge St. David as their master in sacred and secular learning. Again, the schools of Ireland were not less celebrated, about the same time, and had been resorted to by numbers of Cambro-Britons, who spent precious years in the acquisition of similar knowledge.We have already seen, that several renowned Irish ecclesiastics are specially named, as having sought the companionship and guidance of holy David. Some of their Acts are recorded, in connexion with him, and these even serve to illustrate his biography. Encouraged by his example and emulating his piety, while cultivating their natural mental faculties. Almighty God was pleased to reserve them for a career of further usefulness, when returning once more to their native Isle beyond the waves. Hence, in life, St. David was honoured and venerated by some of our most distinguished saints, and it is only just, therefore, when he has passed from life to the happiness of immortality, that in our Island, as within his specially privileged principality, the name of this great and good bishop should be well remembered and invoked. Through his ministry, blessings descended on our forefathers, and so may his protection secure other spiritual favours for those people, who have adopted him as their special patron".