Brendan and Briga - The Benedict and Scholastica of Ireland 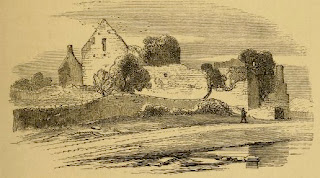 One of the best-known Irish saints whose feast day falls in the month of May must be Saint Brendan the Navigator.  I have already posted an exhaustive series of notes on his life from the Irish Ecclesiastical Record, which can be found here. Hagiographical tradition associates Saint Brendan with a sister called Briga. She is one of a number of saints who bear this name, most of whom are untraceable. The hagiographical tradition, however, associates Saint Briga with a foundation at Annaghdown, County Galway, established for her by her saintly brother. The Life of Saint Brendan records that when his end was approaching, Brendan retired to this monastery and died there in the year 577. The Life also records that as children, both Brendan and Briga were sent to be educated by Bishop Erc, where Brendan recognized the holiness of his sibling:

vi. (12) Brig, daughter of Findlug, his sister, was with him there, and great was his love for her, for he saw the attendance of angels above her.

It was the hint of this warm relationship between the two which led one Irish commentator to describe Brendan and Briga as 'the Benedict and Scholastica of Ireland'. In the following extract from a paper on the Diocese of Annaghdown, Father Jerome Fahey provides an introduction to the monastery of Annaghdown, which he charmingly suggests had 'the attractiveness of another Subiaco' at the time our saints were living there. The paper begins with a reference to the 1872 work of Sir William Wilde, Lough Corrib: its shores and islands with notices of Lough Mask, from which the illustration of the ruined abbey has been taken. I have extracted only the first couple of pages from Father Fahey's paper as most of the article is taken up with an account of the later medieval history of the diocese and its eventual suppression:

Our antiquarians are no doubt familiar with the series of graphic sketches, in which the gifted Sir William Wilde has illustrated with pen and pencil the islands and shores of the Corrib. To say that these sketches are worthy of their distinguished author is no small measure of praise. I may perhaps add that his chapter on Annaghdown, is one of the most interesting and valuable of the series. He tells us how the little headland which extends there into the waters of the Corrib derived its designation from its local characteristics, the "dun" or fort which existed there, and the Eanach or marsh with which it is surrounded. He tells us how St. Brendan and his Sister St. Briga, the Benedict and Scholastica of Ireland, came to reside there; and invested the place for a period at least, with the attractiveness of another Subiaco. His pencil gives us with the strictest fidelity, the Cathedral, the Episcopal residence, and the old monasteries, all hoary ruins. And the massive Norman Keep, he has also sketched, which lifts its battlements high above the Wells of St. Brendan and St. Cormack, and speaks to us of a feudalism long past which has no where in Ireland a larger number of monuments than on the plains of Moy Soela. But the subject of my paper does not permit me to do more than make a passing reference to many of those objects of historical interest, grouped together on the little promontory of Annaghdown.

My paper recalls the existence of a Diocese to which this headland has given its name; a Diocese which has ceased to exist for so long a period as to be now practically forgotten. We shall see that the period of its independent existence was connected with a troubled time in the history of our country, and reflects for us in a peculiar light, many of the strange events of that period. And though its brief period of independence secured for it a remarkable prominence, and a notoriety not always enviable, it is a curious fact that the exact dates of its foundation and suppression, seem to remain to our time enveloped in obscurity.

There is no doubt that long before a Bishop had fixed his See at Annaghdown, the place itself was invested with a special religious and historical interest. It was one of those Sanctuaries which gemmed the islands and shores of the Corrib, in the sixth and seventh centuries, when the "holy foreigner" lived alone at Inchigall; when St. Fechin and his monks laid the foundations of their historic monastery at Cong, when religion in its most austere form, attracted to Inchiquin, and Kilursa, many members of the royal houses both of Connaught and of Munster. It was then that St. Brendan one of the most remarkable of our early Saints, selected the little promontory of Enaghdun, to be for a brief period his chosen place of prayer and repose. His marvellous labours which won for him the well merited title of "Pater laboriosus, " were nearly accomplished. His memorable voyages supplied his contemporaries with themes more wonderful than were furnished by the energy of Columbus to the people of his age. On the neighbouring island of Inchiquin, he had founded a monastery which he had placed under the wise guidance of St. Meldan, and there he had the happiness of blessing the marvellous child St. Fursey, whose future greatness he forecast with prophetic accuracy. His great Church and Monastery at Clonfert, he had completed and placed under the charge of his friend and companion St. Moennean. And here at Enaghdun he had built a monastery for his holy Sister Briga and her nuns, whose privilege it should be to witness his last moments, and close his eyes in the last blissful sleep. His death at Annaghdown, A.D., 577, at the venerable age of 94, was regarded by his contemporaries as an event of national importance. The funeral procession from Annaghdown to Clonfert was made up of a vast multitude from every part of Ireland, and was the most imposing demonstration of reverential regard for holiness of life which the century had witnessed.

It was but natural that the character of St. Briga should lend a still more impressive interest to that remote spot. When, therefore, an independent Diocese was established in that territory, we cannot be surprised that St. Brendan should be selected as it patron; that the place so associated with his life and death, should be selected as the fitting site for the Cathedral, and that its name should be chosen to designate the Diocese…