June 15 is the commemoration of a County Wexford saint with a reputed Breton link, Vouga or Beoc. I have already reprinted a paper on this saint by the 19th-century scholar Margaret Stokes here, but Canon O'Hanlon, drawing on the work of the 17th-century cleric, Albert le Grand, has plenty of additional information to bring us below:

Of a very unsatisfactory character is the information we are permitted to communicate regarding the present ascetic man, the greater part of whose life and actions appears to have been concealed from men and known only to the Almighty. The notices regarding this saint, which have been compiled by Albert le Grand, were taken from an ancient British Manuscript Chronicle, and from an old legendary parchment manuscript, which had been kept in the monastery of St. Matthew, in the diocese of Leon; besides, he made use of certain collections, belonging to the church of Leon, and compiled in the fifteenth century; also, an old choral legendary, belonging to the church of Leon, and some memoranda from the church of Armagh, in Ireland —said to have been authentic, and communicated by Rev. Father Vincent du Val a S. Maria, Vice-Provincial of the Dominicans in Ireland—these were employed in drawing up his account. To those notices, Albert le Grand adds various conjectures of his own. The Bollandists have published Acts of St. Vouga or Vio, at the 15th of June, in eight paragraphs. These have been collected from various sources. We are doubtful, if Vouga had been the Irish name for this saint. He flourished, as has been supposed, about the sixth century; but, his parentage and the exact place of his birth have not been recorded.

He was a bishop, it is said, before he left the country of his birth, but his name is not to be met with in the records of any Irish See. A rather late Life of this holy man, and that founded on popular tradition, seems to have been the chief authority for the legends regarding him. We are told, by Albert le Grand, that the venerable man Vouga lived in Ireland, and that owing to his innocence and uprightness he was ordained a priest, becoming a canon in the church of Armagh, and afterwards its Archbishop, and the Primate of Ireland. For these latter statements, however, there are no historic grounds, and they must be dismissed as altogether misleading and inaccurate. It is related, furthermore, that having received those honours with great reluctance, he soon desired to be released from such a weight of responsibility, and therefore he importuned God with prayers, that he might be permitted to seek some monastery or desert place, where his life should be wholly devoted to heavenly contemplation. The Almighty heard his petitions. He was inspired to sail over the ocean, and to a country where he was destined to find rest, as also to gather great fruits. Vouga then returned thanks to the Almighty, for thus manifesting his divine approval.

Leaving his See of Armagh and its residence by night, he sought the sea coast, where, however, he found no vessel to carry him away. There were some large rocks beside the shore, and these were to furnish a means for transit. One of the legends concerning him states, that he mounted on a huge stone, which he wished to serve as a ship, and that it should move to whatever place had been allotted for his residence. He sailed across the sea on it, until after a voyage of nearly twenty-four hours, he was wafted towards Armoric Britain. He entered the port of Cornuaille, known as Penmarch or Penmarck. Fables have been added to this voyage, which probably had been undertaken in an ordinary sailing vessel of the time. The arrival of St. Vouga, with many other holy men, who came from Great Britain, into Brittany, has been ascribed to before 523, while Hormisdas was Pope, while Justin Augustus presided over the Empire, while Hoel II. ruled in Upper Armorica, and while Jugduvale governed in Lower Armorica. Having left his friends and native country, Vouga resolved on leading an eremitical life in Little Britain. He is said to have received a public welcome from the people of Penmarck, who provided for him a place and house in which to reside. There he preached the Word of God, and he worked many miracles. Afterwards, Vouga erected a hermitage for himself, about one-half mile from Penmarck, so that he might devote himself to a contemplative life. However, his reputation for sanctity having spread throughout all that part of the country, the people flocked to him in crowds, to be healed of fevers and other disorders. Among other miracles recorded is one of his having restored a woman to life.

Finding that this intercourse with worldings tended to distract his pious meditations, he soon resolved on leaving that place. He went from Lanveoc to Brest, but still he could not find a place for rest; until passing through the city of Leineven, he sought a dense wood. There he erected a small oratory with a hut near it. Afterwards, he associated with some religious, in the exercise of meritorious works, until it pleased the Almighty to call him away from the labours of this life to his eternal reward. He died it is stated, on the 15th day of June, about the year 585. Particulars regarding his Acts, because they do not appear to rest on very reliable authorities, are omitted, by Bishop Challoner. His disciples buried him under the altar of his chapel. Thither flocked the faithful, afterwards, and many miracles were wrought through his intercession. At length, some wood was cut down, and a church was there built, which was dedicated to him. This, St. Tenenanus, Bishop of Leon, erected into a parochial church. There, too, the venerable relics of St. Vouga were preserved for a long time, and until the Invasion of the Normans, when it was found necessary to remove the greater part of these to a place of greater security. However, a Missal belonging the holy man was there preserved, and feverish patients often found relief by kissing it. His other relics were brought to a chapel, erected about one mile from Penmarck, on the shore of the sea, and in the diocese of Quimper. At this place, called Treguenec, St. Vie is held in special veneration. There, his relics are said to have been preserved, and the chapel has been dedicated to him. Persons suffering from fevers have often been restored to health through pilgrimages to it, when the saint's intercession was implored. Divers churches are dedicated to him, in Brittany, which proves that he had a public veneration in that province. Thence, too, appears to have spread the fame of his miracles and virtues to Ireland, his native country, and probably it was propagated there by the Anglo-Norman invaders, who first settled in the southeast quarter. 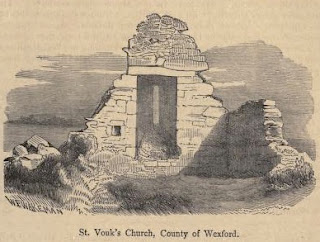 In St. Vogue's townland, Carn parish, barony of Forth, and county of Wexford, we find, there are dedicated to St. Vauk or Vaak a church and a well. A patron was formerly held there, on the 20th of January. It may be possible, this saint was identical with the St. Vouga, Bishop, venerated at the 15th of June. From its existing features, the ruined church of St. Vauk does not appear to have been very ancient. It rises within a graveyard, at the extreme southeastern point of Ireland, and standing not far from the sea-shore. In the Gallican Martyrologies, St. Vouga is commemorated at the 15th of June. His name is missing altogether from our ancient Irish Calendars and records. According to the Rev. Alban Butler, on the 15th of June, St. Vouga or Vio is honoured in Lesser Britain.