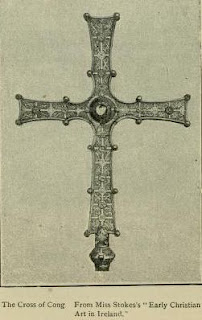 June 8 is the commemoration of a saint of the west of Ireland, Airmedach of Cong. Cong Abbey is today associated with the twelfth-century processional cross pictured left. As our saint is featured in the late eighth/early ninth-century Martyrology of Tallaght, however, he obviously predates these later medieval glories. Canon O'Hanlon brings us the details and gives us a brief guide to the area:

St. Airmedach, or Ermedhach, Abbot of Cong, County of Mayo.

On the 8th of June, in the Martyrology of Tallagh, appears the name Airmedach a Cunga. This place is now known as Cong, delightfully situated at the head of Lough Corrib, and in the county of Mayo. About its early ecclesiastical history, little appears to be known ; but, it is probable, a bishop had been here, from an early period. The founder seems to have been a St. Molocus, or as otherwise called St. Loichen, whose name is found to be connected with the place. But his period does not appear to have been discovered. In 1114, Cunga was destroyed by fire; and, as Gilla-Keerin O'Roda and O'Draeda, two of its Erenachs or Conventual superiors, are stated to have died, A.D. 1127-28, it is not improbable, that some time within these dates, a fine abbey was founded, which belonged to Canons Regular of the Order of St. Augustine.

The ruins at Cong are yet seen, in a good state of preservation; and, they are a truly picturesque group, in a district celebrated for the loveliness of its natural features. They have undergone restoration, at the instance and expense of the lately deceased public-spirited proprietor, Sir Benjamin Lee Guinness. Though not exactly an island, Cong is surrounded by water; while the town or rather village is situated upon an isthmus, by which Loughs Corrib and Mask are divided. The old name Cunga, in Irish, means "a neck," so that the site is very appropriately described, as indeed, many of the Celtic denominations preserved in Ireland are indicative of the local peculiarities connected with them. The delightfully situated village of Cong is remarkably rich in scenery, natural wonders, and antiquities. Here, there is a curious cave , called "the Pigeon Hole," to which a flight of stone steps descends, from the upper surface of the ground outside ; while, at the bottom, runs a subterraneous river, that petrifies into transparent blocks. We find, set down in the Martyrology of Donegal, that a festival in honour of Ermedhach, Abbot of Conga, was celebrated on this day.