Saint Columbanus and the Dangers of the Forest 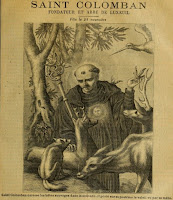 We continue the octave of posts in honour of the 1400th anniversary of the death of Saint Columbanus with a glimpse into how the saint dealt with the dangers of life in the forests. I am particularly pleased that the author here is none other than dear old Canon O'Hanlon, as he did not live to publish a November volume of his Lives of the Irish Saints. He did, however, begin the serialisation of what I am sure would have formed his chapter on Saint Columbanus in a short-lived Irish literary magazine, alas it doesn't seem like he got the chance to conclude it. Here he brings us a vignette from the biography of Saint Columbanus by the monk Jonas of Bobbio:

It was a custom of the Saint to make solitary excursions through the forest, and on a certain occasion, when taking with him the Sacred Scriptures, he fell into a reverie of thought, whether it would be preferable for him to suffer violence from men or wild beasts. He concluded at length, that it would be more desirable to sustain the rage of beasts rather than that of men, since the latter sort of violence could not take place, without the loss of immortal souls. Thereupon, he prayed and armed himself with the sign of the cross. No sooner had he performed these actions, than a troop of twelve wolves rushed towards him and surrounded him on every side. The Saint cried out, "O Lord incline to my aid, O Lord hasten to my assistance." He remained immoveable and intrepid, although the wolves caught hold of his garments. They at length left him, and fled into the recesses of the forest. Scarcely had Columban escaped this danger, when he overheard the voices of certain Swiss robbers, who were lurking in the woods. He passed the forest unobserved by them, and thus escaped a second danger. Taking a longer ramble than usual from his cell, he one day penetrated a hitherto unexplored recess of the forest, where he discovered a large cave, in the side of a precipitous rock. Upon entering, he found a bear, which had here taken up its place of concealment. Columban drove the animal away, without its attempting the least injury against him, and what was still more remarkable, it dared not return afterwards to the den it formerly occupied. This occurred at a place about seven miles distant from Anegrai.*

I do hope you saw the excellent documentary on Columbanus on RTE 1 last night, entitled 'The Man who saved Europe'. An Irish-language version, with sub-titles, was shown on BBC1 two night before that. Congrats to Mary McAleese, and the producer whom I met a few times in the past - David Kilpatrick. It should be shown in every school!

Yes, indeed, I have recorded both versions and am looking forward to seeing them at the weekend. It's great to see a quality production like that being made.