The Children of Senchán, June 23 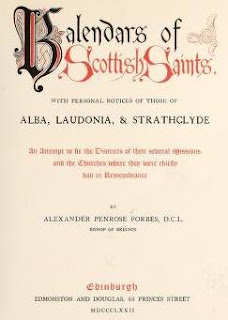 I have always been interested in the collective commemorations of groups of saints found in the Irish calendars. There are two such groups remembered at June 23, the Daughters of Moinan, a post on whom can be read here, and The Children of Senchán. Often these groups incorporate the sacred number seven and today's actually comprises fourteen individuals.  I wish it were possible to find out more about them and of their Scottish connection. Canon O'Hanlon brings only the the barest details:


Article III.—The Children of Senchan.
In the Martyrology of Donegal, a festival intended to honour the children of Senchan is set down, at the 23rd of June. Among the saints of Scotland, we find enumerated the fourteen sons of Senchan or Clann Senchan, for this same date.

Article IV.—The Children of Senan.
We read in the Martyrology of Donegal,  that the children of Senan were venerated, at the 23rd of June. We think, however, that this is only another form for a previous entry.

The same double entry for 'Senchán's children and Senán's' is found in the Martyrology of Gorman, but their names are not found at all in the earlier martyrologies of Oengus and Tallaght.

SENCHANIUS, the Fourteen Sons of June 23.—These are probably the Clann Senchain who are commemorated in the Mart. Donegal at 23d June. A curious " Description of the Island of Sanda," by Father Edmund MacCana, makes mention of the sepulchre of the fourteen sons of Senchanius in that island. It is printed with observations by Dr. Reeves in the Proc. Roy. Irish Acad., vol. viii. p. 132.

Father McCana was an Irish Franciscan who visited the island of Sanda, which lies a few miles off the Mull of Kintyre, in the early seventeenth century.  The text published by Bishop William Reeves is written in Latin and includes these details of the twice seven sons of Senchán:

The paper is available through the Internet Archive here. If your Latin is as rusty as mine you may find it more useful to consult the reprint in the appendix to a 2010 paper on the island, as it includes a translation, here:

‘Fourteen bodies, throughout the world revered,
Of Senchanius born blessed Sanda holds.
Ireland, the mother of divine teachers, once
Begat the saints whom Scotland’s soil covers....