The Left Hand of Ultan 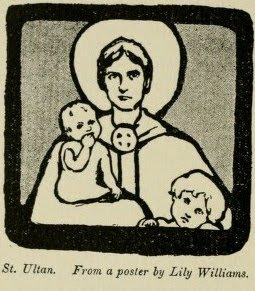 The Scholiasts' notes to the Martyrology of Oengus record some interesting traditions about Saint Ultan, a holy man with a reputation for being particularly kind to children, whose feast is commemorated on September 4. One is his invention of a feeding bottle to nourish his young charges, the other is the story of his cursing of a foreign invasion fleet. The two are linked, because it is whilst being engaged in feeding his fosterlings with his right hand, he is forced to use his left to turn back the fleet, a matter of regret to the Irish ever since.....

Ultan quasi altan 'razor,' for his keenness and sharpness in, miracles and marvels. He used to be called 'the cleric of the children,' for after the (plague called) Buide Connaill every babe without maintenance was brought to Ultan, so that often fifty, or a hundred-and-fifty, of them were with him at the same time, and he himself used to feed them, i.e. the children of the women whom the Buide Connaill had killed. This is what Ultan used to do, to cut off the cows' teats . . . and pour milk into them, and the babes a-playing around him.

Thus then he used to wend, with his gospel on his back, (hanging) without any strap to it!

At that time Diarmait son of Cerball was king of Ireland. There happened (to come) a vast seafleet (of foreigners), which filled most of Erin's estuaries. Great fear affects Diarmait, and then he said:

" Yon 'cleric of the children,' who wends with his gospel on his back and no strap to it, in him let us put our trust that the plague may be taken from us." So envoys are sent from Diarmait to Ultan. Then was Ultan feeding the children when the messengers arrived, and they tell him their errands.

"That is a shame," says Ultan, " that ye did not leave me alone till my right hand was free. My hand that is free, i.e. the left hand, I will raise it against these ships. But if it were my right hand no foreigner would ever invade Ireland." So that hence is (the proverb) "Ultan's left hand against the evil!"


Thus F: Then was Ultan feeding certain children, with a bit of porridge in his lips and some of it on his finger, when the king's gillie arrived. Ultan spake not to the gillie, but uplifted his left hand.

Then the gillie repaired to the king and told this to him, and the king understood that the cleric had raised his left hand in order to expel the fleet. Wherefore from that time to this is (the proverb) 'Ultan's left hand against every evil.'


The feeding of his fosterlings by Ultan he wrecked, destroyed, stranded thrice fifty ships with his left hand. Had it been the right hand that noble Ultan raised against them from us hence no foreigner would ever have come here or there into the land of Erin.

Moninne sang:
Not from a blow on anyone's face are all the clerics red: 'tis a little thing that whitens the visage of Ultan great-grandson of Conchobar.

'Tis great labour to strive for the height in the valley : to strive for perfection with the Son of God, this is what would make the cheeks white.

Ultan was elected into the abbacy of Mochta in Louth, and before him Fursa had been put thereout.

Isn't this picture of the saint with his gospel on his back, miraculously hanging without a strap, feeding destitute children and having others romping around him a wonderful image? A hospital for babies in Dublin was dedicated to Saint Ultan, and in 1920 a book of poems and pictures was issued in its support. It is a most charming volume, and I have taken the picture of Saint Ultan above from it. You can read The Book of Saint Ultan online here.