Today is the feast of a County Down saint whose church site I have visited a number of times, most recently in June whilst on a day tour of ecclesiastical sites with the Down County Museum. It is a site well worth visiting, the church ruins are situated on the coast and have the company of the nearby Saint John's Point Lighthouse. I have previously posted on the elusive Saint John here and now bring the account from Volume 8 of Canon O'Hanlon's Lives of the Irish Saints. In the absence of any substantial information on the man, O'Hanlon tells us instead of his church. He doesn't mention the holy well and bullaun at the entrance to the site, but does say that the eighteenth-century writer, Walter Harris, claimed that the church was intact in his day. I am also interested by the fact that a church which appears to have started out as being associated with a local saint was later called the Chapel of Saint John of Jerusalem: 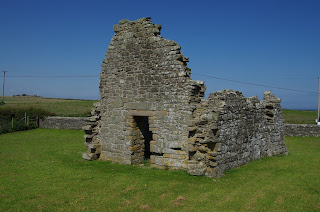 It should be understood, that the proper name Eoin, in Irish, is equivalent to the English name John. The Martyrology of Tallagh records a festival at the 17th of August, to honour St. Eoani mic Carlain. In the beginning of the fourteenth century, his place seems to have been known as the Chapel of Styoun, now St. John's Point. This is a detached townland in the parish of Rathmullan. At this same date, the name occurs in the Martyrology of Donegal, Eoin, son of Carlan, of Tigh-Eoin, in Uladh. This place has been identified with St. John's, in the County of Down. In the year 1183, it would seem to have been designated Stechian, in the time of James I. Stion, and at the time of the Dissolution, it was called the Chapel of St. John of Jerusalem. This ancient chapel belonged to a very antique class of ecclesiastical buildings. It measured only 20 by 13 feet, in the clear. Better than a century ago, the walls were entire. But now, the east wall has been demolished to the foundation, and with it the east window, small and narrow, terminating in an acute angle, formed by two inclined flags. The doorway, in the west wall, is 5 feet, 6 inches, high; 2 feet, 1 inch wide, at the top, but gradually dilating to the threshold, where it is 3 feet in breadth. In the south wall, near the south-east angle, there is a window 2 feet, 5 and a half inches high; 1 foot, 4inches wide, at top, and 1 foot, 9 nine inches, at bottom. In both instances, the aperture is surmounted by a single flag, instead of an arch.