The Deer-Stone: A Legend of Glendalough

Saint Kevin of Glendalough, whose feast is celebrated on June 3, is one of the Irish saints whose cult has taken on a new lease of life due to the modern 'Celtic Christianity' movement. There he is viewed as the supreme exemplar of the supposed unique relationship the Irish saints enjoyed with nature and animals. In general, I am uneasy whenever I see people of earlier ages being seamlessly cut and pasted into the agendas of contemporary movements. That is not to deny that stories of 'saints and beasts' figure in the hagiography of Irish saints and in native folklore, but there is a particular context in which these tales are framed, one that does not necessarily reflect current 'green' concerns. Irish poet, Dora Sigerson Shorter (1866-1918), wrote about one of these legends, the story of how Saint Kevin saved the life of an abandoned infant by getting a female deer to leave her milk in a hollow stone for the human baby. In The Deer-Stone, she first begins by relating how the young wife of Colman Dhu is poisoned while nursing her baby by a jealous and evil maidservant. Her distraught husband then opts to join his wife in death, now the witch has only to wait for the infant to succumb. I have picked up the text at the point where Saint Kevin enters the scene, for me the moral of the story is not that Saint Kevin is some sort of Doctor Doolittle who can talk to the animals, but that as an Irish saint living a life of asceticism, prayer and repentance, he can talk to God and manifest the divine power to punish the wicked and save the innocent. The poem ends by telling us that people can still point to the 'Deer-stone', this is a common phenomenon at Irish holy sites where natural features are cross-referenced to episodes from the lives of saints. A picture of the Deer-stone of Glendalough can be seen here. 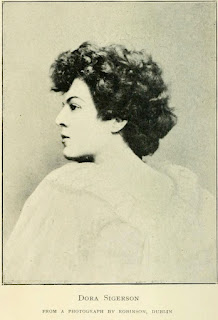 A LEGEND OF GLENDALOUGH


It was the good St. Kevin went,
All bowed and lost in prayer,
And as he paced his lonely path
The young witch met him there.


And in her gown the poison cup
She did most quickly hide,
But spoke the good saint unto her,
And would not be denied.

"What evil thing is this?" he said,
"That you must put away?
It is no gracious act indeed
That fears the light of day."

"It is but bread," the witch replied,
"From my small store I take,
To feed a poor deserted babe,
I go for pity sake."

"Now, be it bread," the priest replied,
"I pray it multiply;
But if it is an evil thing,
Full heavy may it lie."

And then the priest, all deep in prayer,
Went forth his lonely way,
While stood the witch upon the path
In wild and deep dismay.

For in her robe the poison cup
Did all so heavy grow,
She scarce could stand upon her feet,
And could but slowly go.

Now when she reached the rugged rock
That held her hidden home,
The waters threw their magic up
And blinded her with foam.

She gave a sharp and sudden cry
And fell within the lake,
And so may perish all who sin,
And evil vengeance take.

But good St. Kevin, deep in prayer,
His holy way did go.
Soon came to him the sound of grief,
Soft cries of bitter woe.

There in a dark and lonesome place
A little babe he found,
And, close beside, a lovely pair
All cold upon the ground.

"Movrone, Movrone," the good saint cried,
"What evil deed is here? "
And for their beauty and their youth
He shed a bitter tear.

He dug for them a lonely grave,
A grave both wide and deep;
"And slumber well," he softly said,
"Till God shall end your sleep."

He knelt him down upon his knee
Their lonely bed beside,
And then he saw the little babe
That weak in hunger cried.

He raised it up in his two hands,
And held it close and warm;
"O Christ," he said, "your mercy give
To keep this child from harm.

" Oh, pitiful indeed is this
Poor little one alone,
Whose dead lie peaceful in their sleep
While he doth make his moan.

" O Mary, who in Bethlehem
Held once upon thy breast
A tender babe, look down on this
Who is so sore oppressed.

"I have no food for this poor child,
Who must with hunger die.
Thy mercy give," the good priest prayed
With many a piteous sigh.

He looked across the waters deep,
And to the hills so brown,
And lo! a shy wood creature there
All timidly came down.

And thrice it sprang towards the west,
And thrice towards the east,
It was as though some hand unseen
Drove forth the gentle beast.

But when the little child it heard,
That still with hunger cried,
It sprang before the guiding hand,
And stood the babe beside.

And in a hollowed stone it shed
Its milk so warm and white,
And then, all timid, stood apart
To watch the babe's delight.

And at each eve and every morn
The gentle doe was there,
To find the little babe, and see
The saint, all deep in prayer.

In Glendalough the stone lies still
All plainly to be seen,
And many folk will point the place
Where once the milk had been.