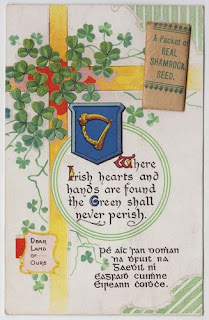 To celebrate the feast of our national apostle, below is an extract from an 1889 paper on 'The Holiday Customs of Ireland'. Interestingly, unlike the holidays associated with the feasts of Saint Brigid and Saint Martin of Tours, which the writer also covers, he finds the popular celebrations of Saint Patrick's Day lacking in the mythological, pre-Christian overtones he felt characterized those other holy days. Thus he tries to explain the origins of the feast with a bit of stage Oirish poetry which ignores the reality that the 'birthday' of a Christian saint marks the day on which he leaves this world for heaven rather than commemorates the day on which he is born into it. Rather more interesting is his account of the croiseog in folk tradition:

Although Saint Patrick's day is pre-eminently the Irish national holiday, not much can be said of it in a descriptive way, as the observances connected with it have but little of the old ceremonial or mythologic character. Processions and speeches in the larger towns and smaller gatherings in the country villages, with the assistance of the pipers and fiddlers in the evening, fill out the day, while everyone seems bent on carrying out to the letter the spirit of the old ballad which declares that

The festival commemorates the apostle and patron saint of Ireland, this day, according to most writers, being the anniversary both of his landing in Ireland and of his death, the latter occurring in the year 493. That typical Irish poet, Samuel Lover, by turns so humorous and so pathetic, gives the following characteristic account of the origin of the celebration:

The Birth of Saint Patrick.

On the eighth day of March it was, some people say,
That Saint Patrick at midnight first saw the day,
While, others declare 'twas the ninth he was born,
And 'twas all a mistake between midnight and morn;
For mistakes will occur in a hurry and shock,
And some blamed the baby, and some blamed the clock,
Till with all their cross questions, sure no one could know
If the child was too fast or the clock was too slow.

Now the first faction fight in old Ireland, they say,
Was all on account of Saint Patrick's birthday.
Some fought for the eighth - for the ninth more would die;
And who wouldn't see right, sure, they blackened his eye!
At last both the factions so positive grew
That each had a birthday, so Pat than had two;
Till Father Mulcahy,  ho showed them their sins,
Said, "one can have two birthdays but twins."

Says he, " Boys, don't be fightin' for eight or for nine;
Don't be always dividin'— but sometimes combine;
Combine eight with nine, seventeen is the mark,
So let that be his birthday." "Amen," says the clerk,
"If he wasn't a twin, sure our history will show
That, at least, he's worth any two saints that we know! '
Then they all got blind drunk, which completed their bliss,
And we keep up the practice from that day to this.

It is a saying among the people that after Saint Patrick's day it is time to begin to make garden. In Connemara they say that one should have half his farm work done by this time and half his fodder still on hands, and that after this every alternate day will be clear and sunshiny. The weather on this day is proverbially fine, and of course there is an Irish reason for it. In the first days of Christianity in Ireland Saint Bridget was much hindered in her work by the rains, which are especially frequent in this country, until at last she obtained as a favour from God that every other Sunday should be a clear day, so that she might preach to the crowds which came to hear her. Not to be outdone, Saint Patrick asked that his anniversary might be a day of sunshine, which was granted, and from that time forth the 17th of March has always been a fine day.

On this day every child throughout Ireland, excepting in Connemara and some of the northern districts, is expected to wear upon the left breast a small disk intersected by crosses upon the surface and known as a croiseog (crishoeg) or "favour." In Connemara the croiseog is worn only by the women. They are of various designs and colours, but the general pattern is everywhere the same. The disk is made of stiff paper, or of silk lined with pasteboard, and across the surface are pasted strips of paper of different colours, crossing each other at right angles, so as to form some even number of crosses having a common centre in the middle of the disk. These strips are sometimes cut so as to give the arms of the cross an elliptical shape. Around the edge of the disk, between the arms of the crosses, are drawn small arcs which are filled in with dots, shamrocks and other figures, in ink of various colours. The ends of the crosses are sometimes trimmed with ribbons. In Clare and Connemara there is usually but one cross, which is drawn upon the surface of the disk with the blood of the wearer, the blood being obtained by pricking the end of the finger. The green is usually procured from grass and the yellow from the yolk of an egg.

At the merrymaking, in the evening, no good Irishman neglects to "drown the shamrock" in "Patrick's pot" — in other words, to dip the shamrock in a glass of whisky. After wishing the company health, wealth and every prosperity, including "long leases and low rents," he dips the sprig of shamrock into the liquor which he is about to drink and then touches it against another, which he wears in his hatband in honor of the day. It is hardly necessary to state that the shamrock is a small variety of clover and the national emblem of Ireland. According to the popular belief, its adoption as the national ensign dates from the time when Saint Patrick used it to explain to the pagan Irish the mystery of the Trinity, or three in one. In East Galway and adjacent parts, the processions on this day carry banners bearing representations of incidents in the traditional life of Saint Patrick, such as the baptism of Oisin, the banishing of the snakes, etc. Everywhere men wear the shamrock in their hatbands, while women and children fasten it in their hair or upon their breasts.