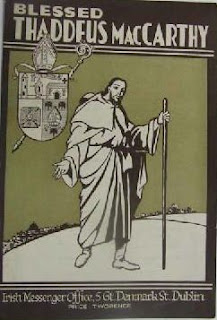 October 25 is the feast of Blessed Thaddeus [Tadhg] McCarthy,  a fifteenth-century Irish Bishop who, having been unjustly deprived of his see, set off to obtain redress in Rome only to die alone on his return journey. Yet although he belongs to a very different world than that of the early medieval period saints this blog usually features, I am nevertheless aware of a thread of continuity which links him to them. In his popular title 'The White Martyr of Munster', Blessed Thaddeus reflects the Irish understanding of martyrdom as preserved in the Cambrai Homily:
The white martyrdom for someone is when they part for the sake of God from everything that they love, although they may suffer fasting and hard work thereby.
Furthermore, as an Irishman who died and was buried in Italy, he is following in the footsteps of those peregrini of the Golden Age of the Irish mission to Europe, from the great Saint Columbanus to Cathadulus of Taranto, Donatus of Fiesole or Ursus of Aosta.  This was a link acknowledged by Fra Anselmo Tommassini, in his 1937 study Irish Saints in Italy:

Our pious pilgrimage throughout the various provinces of Italy in search of traces of Irish sanctity comes to an end with a strangely pathetic figure whose humility is equalled only by his dignity. Our last Irish saint [Blessed Thaddeus] links up in the most curious fashion with the first one encountered on this side of the Alps, with that St. Ursus, the apostle of the Valle d'Aosta, who gave his name to so many churches and hospitals...

For it was in one of these hospitals, the Hospice of the XXI, where twenty-one beds were reserved for the use of poor pilgrims and an institution served by the Canons of Saint Ursus of Aosta, that Blessed Thaddeus died on October 24/25, 1492. Interestingly, Saint Ursus of Aosta's feast is February 1, the same day as that of Ireland's national patroness Saint Brigid.

Four centuries years later the people of Blessed Tadhg's homeland rejoiced in the rediscovery of his memory, in the official confirmation of his cultus and in the translation of his relics from Ivrea to Cork. Below is a Pastoral letter from someone very much involved in these celebrations, the then Bishop of Cork, Thomas (Alphonse) O’Callaghan, O.P. detailing the life of Blessed Thaddeus and commending him as an intercessor to his flock:

An Irish Bishop Saint
In his Pastoral, the Bishop of Cork  says: — 'With feelings of heartfelt  joy we announce to you that it has  pleased His Holiness Leo XIII. to confirm, by his apostolic authority, the veneration that has been paid since the close of the fifteenth century to the Servant of God, Thaddeus McCarthy, Bishop of Cork and Cloyne. Henceforth he will be revered by us with the title of Blessed. His feast will be celebrated in the diocese each year throughout all future time, and Mass will be offered in his honour.
He was of the princely house of McCarthy, and was born in the year 1455, at a time when his family was just regaining its former power in Munster. Numerous buildings and castles, the ruins of which are scattered through the diocese, and with which we are familiar, were erected by his kinsmen and contemporaries, Cormac McCarthy Laider, who was appointed his protector in Cork by the Sovereign Pontiff, Innocent VIII., built Blarney Castle, and many churches in the neighbourhood of our city. He founded Kilcrea Abbey and the Abbey of Ballymacadane. Gifted with a rare natural disposition, and trained from his childhood in the practice of virtue, Thaddeus had hardly completed his studies when, despising all worldly allurements, he hastened to enrol himself in the ranks of the clergy. The fame of his learning, of his piety, and of his other virtues, spreading and increasing from day to day, he was, while yet in the flower of his youth, and already effulgent with sanctity, appointed by the Sovereign Pontiff, Sixtus IV., to govern the See of Ross; and he received episcopal consecration in the Church of St. Stephen (del Caeo), in Rome, on the Feast of the Finding of the Holy Cross, A.D. 1482. Having become in very soul the model of his flock, he ruled the Church committed to his care with prudence and diligence. By his devotion to religion, and his zeal for souls, he merited to be praised as the best of pastors. Like our Divine Lord, whose life he imitated, he carried a heavy cross; and in the exercise of his episcopal duties he was opposed, and calumniated, and denounced as a mercenary pastor, and as a steward of iniquity. The intrigues of his enemies went so far that the mind of the Sovereign Pontiff, Innocent VIII., was turned against him, and he was visited with severe ecclesiastical penalties. He bore his humiliation in perfect patience, without a word of complaint, and his virtue, tried on the touchstone of tribulation, attained in a short time the arduous summit of perfection. The innocence of Thaddeus was soon after proved, and his sanctity was made so evident that the same Pontiff, Innocent VIII., resolved not only to restore him, but to call him to still greater honours. He appointed him to the united Sees of Cork and Cloyne, regarding him rather as an angel than a man, and deeming him worthy of the greatest favours. When, by the bitter persecution of powerful enemies, and by the laws that then excluded the native Irish from ecclesiastical benefices, he was again forced into exile, he left Cork clad in the meanest attire in the garb of a pilgrim, and proceeded to Rome. Having worshipped at the Tomb of the Apostles, he laid his cause before the Vicar of Christ, who received him with affectionate cordiality, furnished him with strong-worded letters, and denounced in the severest terms the trespass on the liberty of the Church. In returning on foot he stopped to rest at Ivrea, in Piedmont, where, poor and unknown, he was received into the Hospital for Pilgrims. There, broken down from privations and toil, wearied by long travelling, and already ripe for Heaven, he delivered up his soul to God on October 24, 1492, in the thirty-seventh year of his age.
His death was announced by a light from Heaven shining in a marvellous manner, and the strangeness of the event attracted many to the bedside on which were laid his mortals remains. The Bishop of Ivrea, Nicholas Garigliatti, accompanied by his clergy, hastened to the spot, and discovered that the poor pilgrim was the Bishop of Cork and Cloyne. His body, attended by a great multitude of the faithful, the clergy, and civil magistrates, was carried to the Cathedral in solemn procession, which the accounts of the time say was rather a triumph than a funeral. It was placed under the High Altar, in the same sepulchre with St. Eusebius, patron of the Diocese of Ivrea, where it has since been venerated, and God willed the remarkable sanctity of His servant should be attested by many miracles.
It remains for us, dearly beloved brethren, to pay due honour to his memory, and to have recourse to his intercession, that by his prayers we may obtain what we stand in need of. Though forgotten during the centuries in which it was sought to blot out all traces of our religious history and our traditions, we may trust that he has not ceased to plead for us at the Throne of God, and that he has ever been, as the Prophet Jeremiah was to the Jewish nation, a lover of his brethren, who prays much for the people."  Catholic Press, (Sydney, NSW), Saturday 4 April 1896, page 21

Email ThisBlogThis!Share to TwitterShare to FacebookShare to Pinterest
Labels: Irish saints in Europe, Saints of Cork, Saints of the Fifteenth Century

Lovely piece, Marcella. He’s a favourite of mine - see my piece The Bishop Who Never Was.

Thanks, Finola. I am delighted to have finally written about him on his feast day, it is such a wonderful story. Now have to get on the trail of St Ursus of Aosta and find out more about him. For anyone else reading please check out Finola's post at her Roaringwater Journal site and enjoy the fabulous illustrations: https://roaringwaterjournal.com/2018/04/01/thaddeus-mccarthy-the-bishop-who-never-was/