The Prayer of Saint Atty 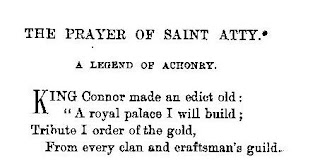 A couple of days ago I reprinted a poem by Philadelphia resident Patrick J. Coleman on the founding of the diocese of Achonry by Saint  Nathy.  Now we have another of his poetic offerings, this time in praise of Achonry's female patroness Saint Attracta and her role as peacemaker and protectress.

THE PRAYER OF SAINT ATTY.*

A LEGEND OF ACHONRY

KING Connor made an edict old:
"A royal palace I will build;
Tribute I order of the gold,
From every clan and craftsman's guild.

"Tithings of scarlet and of silk,
Curtain and screen of regal woof
Deep-uddered heifers, rich in milk,
And bronze and timber for the roof.

"From Leyney's lord, in token due
Of fealty, I will ordain
A hundred masts of ash and yew,
A hundred oaks of pithy grain."

"Saint Atty, keep us safe from scath
And shield us in the battle crash!
For roof of royal house or rath
We will not render oak or ash!"

Thus lowly prayed the Leyney clan,
While sang the birds in bush and brake.
As fast they mustered, horse and man,
To face the foe by Gara's lake.

For, wroth' at heart, came Connor's clan;
Ah, Christ! they made a horrid front,
With red spears bristling in the van.
And shields to brave the battle-brunt.

From wing to wing in wrath they rolled,
Crested with helmets all afire.
Of burnished bronze or burning gold.
To martial measures of the lyre.

A dreadful war! the blessed saints
Defend to-day the Leyney clan!
For they must reel before the steel
Of such a hosting, horse and man.

From sounding sheaths the swords flamed out,
The clattering quivers echoed loud,
From their dark ranks the battle shout
Broke out, as thunder from the cloud.

"Saint Atty, keep us safe from scath!"
Thus made the Leyney men their prayer ;
When lo! adown the forest path
Trooped, lily-white, a herd of deer!

Broke from the branching thicket green,
While mute the watching warriors stood;
Such gracious deer were never seen
In Irish fern or Irish wood;

And, mighty marvel, on their backs.
Bound by a maiden's tresses gold.
Clean-hewn as if by woodman's axe.
The tribute of the wood behold !

Nor paused the sylvan creatures sweet,
But gliding onward, like to ghosts.
Cast off the wood at Connor's feet
In wondrous wise betwixt the hosts;

Then vanished in the forest green.
While mused amaze the king and kern;
And nevermore from then were seen
In Irish wood or Irish fern.

Down dropped the sword to thigh and hip,
"God's will be done, let hatred cease!"
Rose up the cry from every lip.
And harps attuned a chord of peace.

Yea, "blessings broke from every lip,
To God and to His saints above.
And hands that came for deadly grip
Were mingled in fraternal love.

" 'Gainst scath or scar our battle-shield
Is Atty, saint of Leyney's clan!"
They sang, as homeward from the field
They hied, unscathed, horse and man.

For in her chapel in the wood
The boding war had Atty seen,
And for the people of her blood
Made prayer amid the forest green.

And men do say that on that day
She saved the Leyney clan from scath,
Such power there is when lowly pray
The pure of heart and keen of faith.

And still when autumn gilds the lea,
And scythes are shrill in meadows ripe,
The rural pageant you may see
Sporting with jocund dance and pipe.

The village women you may mark
In Leyney, at Saint Atty's well.
Ere yet hath trilled the risen lark
In golden mead or dewy dell.

*Saint Atty is the loving name of the people of Achonry for Saint Attracta, the patroness of the diocese.