The Holy Wells of Achill Island 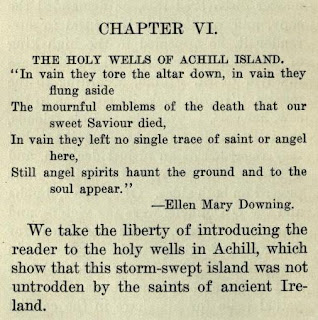 Holy wells played a large part in the preservation of the memories of the saints of Ireland, acting not only as sites where their intercession could be sought, particularly for healing, but as the focal point for the celebration of a saint's 'pattern' or feast day. They are found throughout the country, including on Ireland's off-shore islands. Below is a brief account of three of the holy wells of Achill Island, County Mayo, from a 1910 work by P.W. Joyce. The first seems to be connected to a Saint Damnet and attracted pilgrims on August 15. The second is linked to Saint Colman, who sought refuge in the west of Ireland at 'Mayo of the Saxons' following the adoption of the Roman date of Easter. Joyce records that this well too was still being visited by Achill's older people in his day. The final one is equally interesting and illustrates many of the difficulties associated with the attribution of holy wells to specific saints in folk tradition.  It is known as Saint Finan's well but Joyce is doubtful about this, I presume his remarks on the placing of a well-known prefix, in this case mo, 'my' to many saints' names explains how the Minan cliffs have been interpreted as deriving from 'Mo Finan', which he feels may be 'fanciful philology'. Instead he offers an intriguing alternative explanation concerning a former parish priest and his remarkable saddle horse! Interestingly, the Connaught Telegraph of August 8, 2022 carried a report that the holy wells of Mayo are to be surveyed by archaeologists so perhaps we can learn more of those on Achill Island in the near future:

THE HOLY WELLS OF ACHILL ISLAND.

We take the liberty of introducing the reader to the holy wells in Achill, which show that this storm-swept island was not untrodden by the saints of ancient Ireland.

There is a holy well at Kildownett, hard by the graveyard, which a tradition, but a very faint one, connects with a St. Damnet. It is still visited by pilgrims on the 15th of August. There is also one of more note at Sliabh More, called after St. Colman, the patron of Dukinella church. Probably St. Colman may have crossed over from Inish Boffin to Achill Island, in search of a suitable site for a monastery, wherein to segregate the Saxon monks who followed him and his Irish disciples from Lindisfarne. The Celts and Saxons seemed to have found it more  difficult to practice the evangelical counsels, living under the same roof. Accordingly, their prudent founder, St. Colman, left the Celts in possession of Irish Boffin and went in search of a monastic site for the Saxon brethren. He at length succeeded in founding a monastery at Mayo, which was called Mayo of the Saxons. The old people still make pilgrimages to St. Colman's well.

The third and last, which we wish particularly to describe, is situated in a scene of solitude and beauty close by the Cathedral Rocks in the Keel strand. It was, indeed, a happy thought to make it holy. The wonders of nature around, mountain majesty and thundering sea, make fitting scene for the wonders of grace; for the voice of the mountains and the voice of the sea seem to have suggested to all  the sages thoughts of the "great beyond." The sea here, especially, preaches a beautiful sermon to one who may choose to listen and:

"Wander by the pebbly beach,
Marking the sunlight at the evening hour,
And hearken to the thoughts the waters teach -
Eternity, eternity and power."

The well is situated under the shadow of the Minan cliffs, and is named St. Finan's well. The tradition is that St. Finan gave his name, not only to the well, but to the mountain also, which should be properly called Finan's cliff. Perhaps the practice of our fathers who placed a well-known prefix before the names of many of our saints, may explain the difficulty of deriving the modern name from Finan. This, however, is probably fanciful philology, and the usual explanation remembered by the very old people to have been parish priest of the island, and the possessor of a wonderful saddle horse, that braved every danger by night as well as by day.