'Pure was her heart amid the wicked': In Praise of Saint Samthann 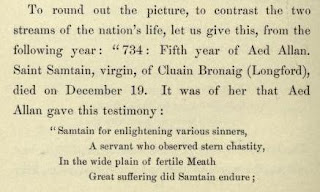 December 19 is the feast of Saint Samthann of Clonbroney, County Longford. She is one of only a handful of women saints to have left a written Life and I have posted some selections from the Life of Saint Samthann here. Although the Life is the most important source of information regarding this saint it is not the only one. She features in a number of other sources including the poem below, attributed to an eighth-century high king, Aodh Allán, son of Fearghal. In it the poet pays tribute to Saint Samthann's reputation for asceticism and her courage in the struggles of the monastic life:

Saint Samtain, virgin, of Cluain Bronaig (Longford), died on December 19. It was of her that Aed Allan gave this testimony:

"Samtain for enlightening various sinners,
A servant who observed stern chastity,
In the wide plain of fertile Meath
Great suffering did Samtain endure;

She undertook a thing not easy,
Fasting for the kingdom above.
She lived on scanty food;
Hard were her girdles;

She struggled in venomous conflicts;
Pure was her heart amid the wicked.
To the bosom of the Lord, with a pure death,
Samtain passed from her trials."