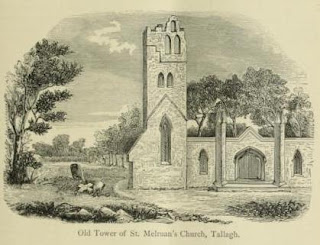 January 5 is the feast of an Irish Saint Joseph, a County Dublin saint associated with the monastery of Tallaght. The calendars record that he was a bishop, but alas, nothing else. Canon O'Hanlon in his account of Saint Joseph focuses for the most part on the monastery at Tallaght and the annual commemoration of its founder Saint Maelruain.  He ends by noting another episcopal bearer of the name whose death is recorded in the annals in the ninth century:

Many old scenes of monastic life in Ireland are yet venerable and still endeared to popular recollection. Within the walled and enclosed graveyard of Tallagh, where, on a gentle eminence, stands the present Protestant church, the tall tower of a more ancient religious edifice may be seen. This formed the west entrance and porch to the more ancient church, the very foundations of which are now quite obliterated; although early in the present century the building itself had been used for Protestant services. The tower contains in the second story a bell; but above it are opes, in which probably a peal of three small bells had been formerly placed. It is connected by a covered passage with the Protestant church, the vestry of which is the under-part of this old tower. Not far from the site of the obliterated church, and on the southern side of the cemetery, is shown the pedestal of an old stone cross, bedded in the earth, and at the head of a high grave are the arms of an old granite cross, which at one time surmounted the plinth. The intermediate shaft seems to have been broken, nor are its fragments discoverable. Here, it is said, St. Melruan, the patron of Tallagh, lies interred. Every year, on the 7th of July, at Tallagh, and from time immemorial, the inhabitants have been accustomed to walk from the adjoining village in procession, bearing a long pole, crowned with natural flowers, to the site of St, Melruan's grave. The standard-bearer carries what is locally called "the garland", seven times in a walking circuit around the grave: then all the processionists return to the village, after prayers have been said at the spot. The pole is carefully set aside, until required for floral decoration the following year. This custom is probably but the remnant of an ancient processional and solemn religious service in memory of St.Melruan. The site of his grave is held to be sacred, and no person is allowed to be interred there. The people are accustomed to measure their family places of interment, as being so many feet or so many yards from the grave of Tallagh's holy patron.

Few other antique monuments are now to be seen, although there is a tradition, that very ancient Irish inscriptions had been read on tombs and crosses there during the last century. These have all disappeared, but many are probably buried in the soil beneath.

This day the published Martyrology of Tallagh registers a festival in honor of Joseph, Bishop of Tamlachtan. In addition to this entry of the calendar, having its origin at his own locality, we read in the Martyrology of Donegal,  that Joseph, Bishop of Tamlacht-Maelruain, set down on this day, was venerated among our national saints. This name was no unusual one, in the early period of our Christian history. It is pleasing to discover, that the chaste spouse of the Immaculate Blessed Virgin Mary gave name to this holy man.

Under the heading of Tamlacht, Duald Mac Firbis enters the present Joseph, Bishop of Tamlacht Maolruain, for January the 5th. In the Irish Ordnance Survey Extracts for Dublin County his name occurs.

Another distinguished ecclesiastic of this name is found in our Annals. Under the head of Claun-uais, Duald Mac Firbis and the Four Masters enter Joseph of Ros-mor, who was an eminent bishop and scribe of Cluain-uais. He died in 839. He presided over other churches.