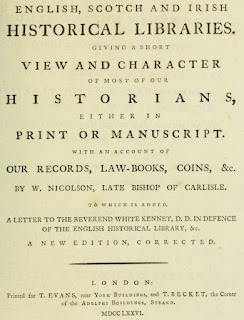 Continuing the 1776 list of Irish saints whose written Lives survive:

Fechin, Abbot of Foure or Favoir. His life was written by his contemporary, the wise Aileran, who died in the year 654. It begins, Sanctus ac venerabilis Abbas Fechinus. He is called by the Irish Feichin Fabair, or Fechin of Foury, or Balle-Leabar, where he lived. From this abbot a fair manor in the county of Louth, belonging to the Archbishop of Armagh, has the name of Tearmuin-Fechin, that is, Asylum Fechinianum. Archbishop Usher says he died A.D. 664.

Fiachre, nobly descended, lived a hermit in France about the year 622. His life is several; we have it in MS. in John of Tinmouth's collection: and printed by Capgrave and Surius. All of these take notice of women being forbidden to come in his church or mill; which passage Cambrensis ascribes to St. Fechin.

Finan, Wallico nomine, says Archbishop Usher, Winninus; Ut enim Fin Hibernis, ita Gwyn et win Cambro-Britannis album denotat. He was Abbot of Ceanhetich, and died on the seventh of April, in what year we know not; but we are well informed that he was contemporary with St. Brendan. The are two Manuscript copies of his life, the one whereof begins, Fuit vir Vitae venerabilis. The other, Finanus Sanctus de plebe quae Corcudubne dicitu ortus fuit.

Finbar, first Bishop of Cork. He lived about the year 600, ad his festival is kept on the twenty-seventh of September. His manuscript life begins, Sanctus Dei Electus. He is sometimes called S. Bar.

Findan, so of an Irish prince, fled from the Danes in the year 795, and turned hermit in Germany, where he died. See his life in Goldastus.

Furseus. Besides what venerable Bede has recorded of the visions of this saint, whom he makes an Irish-Scot; Archbishop Usher quotes a manuscript life elder than Bede; and another published by A. Du Chesne.

Gall, died Abbot of St. Gall in Switzerland, October the sixteenth, 635. Wallafrid Strabo wrote his life, extant in Surius: he and others vouch him to be Irish; though Dempster reckons him among his own countrymen.

Ita, Ida, or Ide, Abbess of Cluancredil. Her life was written by one who lived, about her time, in the close of the sixth century.

Ivorus, Ibarus or Ibar. In his life we are told, that he was born in Ulster; and that his sister married to Cormac, King of Leinster, was mother to St. Abban. But his residence was first in the isles of Arran, and afterwards at his monastery of Beherin, or Inis Beg-Ery, near Wexford.

Keivin or Coemgen, native of Leinster, and Abbot of Gledelach, died June the third, in the year 618, aged an hundred and twenty years. We have two manuscript copies of his life; one of which begins, Vir erat in provincia Lageniensium; and the other, Natus in Hibernia insula... [Glendelach] was an episcopal see, which is now annexed to Dublin...

Kiaran, senior, lived at the same time with St. Patrick and St. Declan, the first Bishop of Saiger; and died the fifth of March. One writer of his life begins, Beatissimus episcopus Kearanus. Archbishop Usher had another, often quoted by himself; wherein we are told that Kiaran was born in Ossory in the year 352. Tinmouth says he died in Cornwall, where he is remembered by the name of Pyranus. ...

Kiaran, junior, surnamed Macitaeir or Filius Artificis, was scholar to St. Finian, first Abbot of Clonmacnoise, and died the ninth of September, 549. His life, which is cited at large by Archbishop Usher, begins, Vir gloriosus et vita sanctissimus abbas Queranus.

Kilian, an Irish Abbot, afterwards bishop and martyr at Wirtsburg, died July the eighth 689. His anonymous life is given us both by Canisius and Surius.

Kinnic, died Abbot of Aghavo, in upper Ossory, the eleventh of October, in the year 600. We have two manuscript copies of his life; one whereof begins, Cannicus sanctus, abbas...; and the other, Sanctus Kynnicus de genere... There is also extant the office, or form of prayer, used in the celebration of his festival; in which Kilkenny is called Achadh-bo, which is there said to signify Ager Boum.

Laserian or Molaisse, Abbot of Devenish, died the twelfth of September, 571. His life begins Postquam divina gratia operante ... His residence was in the monastery of Daimh-Innis, or Oxenholme, which he built in Loch-Erne. His life says that he converted Conal the Red, or Colman Derig, Prince of Ulster; who before had forced St. Columb into perpetual banishment.

Lugid, or Molua, Abbot of Clonfert, died the fourth of August in the year 609. the anonymous writer of his life, which we have in the college library of Dublin, says that he was a leper twenty years.