Monasticism in the Early Middle Ages 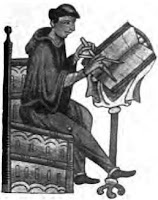 Below is a short but useful introduction to the subject of monasticism in early medieval Ireland by scholar Lisa Bitel.

Monasticism in the Early Middle Ages

Irish Christians embraced monasticism as enthusiastically as they had accepted the Christian religion itself. As with the doctrines and rituals of Christianity, the Irish created a form of institutionalized ascetic life dependent upon continental originals but unique to the society and culture of Ireland. What is more, by the end of the seventh century Irish monks had thoroughly organized churches and parishes throughout the island according to monastic models, and had even begun to send missionaries abroad to bring Christianity to formerly Roman territories. They also built schools and scriptoria (copying rooms) where they began producing the artistic and scholarly works that made them famous throughout Christendom.

Both bishops and monastic men and women helped to create Irish Christianity. Saint Patrick (d. 461? or 493?), the legendary missionary to Ireland and its primary patron saint, was a bishop, not a monk, but his two fellow patron saints, Saint Brigit of Kildare (d. 524?) and Saint Columba (Colum Cille) of Iona (d. 5??), were both heads of monasteries. Around 450, Saint Patrick himself made the first possible references to people pursuing ascetic vocations in his descriptions of "virgins in Christ" and "religious women," including noble-women who endured harassment from their parents, Irish and British slaves, and widows (Confessio, sec. 41, 49, trans. De Paor 1998, pp. 250–253). No communities of nuns or monks appeared in Ireland for another thirty or forty years. Patrick's female comrades in religion were probably following the advice of theologians such as Saint Jerome, who explained to Roman women exactly how to organize and educate themselves for an ascetic life in their own homes.

The first monastic community in Ireland may have been created by women at Kildare under the leadership of Brigit. Cogitosus, a monk of Kildare around 670, wrote the earliest Irish saint's life about Brigit. He suggested that she had established a church and a community of women, along with a bishop, at or near an old pagan center in the province of Leinster around 500. Kildare was patronized and staffed by the local nobility and royalty of the province. Abbesses and bishops usually came from leading families of the dynasty that controlled the kingship of Leinster or were the children of local chiefs. The monastery owned properties near its main church, and had tenants who provided income. The abbess of Kildare also demanded allegiance and revenues from other monasteries and churches scattered around Ireland dedicated to Saint Brigit, as well as from other local Leinster churches. Already a major pilgrimage site in the seventh century, Kildare had become by 650 a place of legal refuge, treasury of kings, and cultural center, where crowds flocked, as Cogitosus wrote, "for the abundance of festivals" and "to watch the crowds go by" (Vita Sanctae Brigidae, in Migne, PL 72, col. 789).

By the time that Kildare had acquired a major church and island-wide fame, it had competition as the most flourishing site of Irish monastic practice. Around the time of Brigit, many founders of ascetic communities built their settlements and established their own reputations as saintly monks and nuns. In particular, a community dedicated to Saint Patrick at Armagh in Ulster had become his primary church and acquired dependent foundations of its own. In the late seventh century, via two lives of Patrick and a collection of jurisdictional statements called the Liber Angeli (Book of the angel), Armagh's leaders claimed the governance of a paruchia (network of churches and monasteries) that spread throughout Ireland, inferior in authority and size to none. The Liber Angeli, supposedly handed to Patrick by an angel, declared that the bishop at Armagh had the right to adjudicate all rivalries and disputes among Irish monasteries and churches. Other paruchiae, especially those of Brigit and Columba (based on the Irish island monastery of Iona off the coast of Scotland) contested Armagh's claims to authority, territory, and dues in the seventh century, but Armagh eventually won the battle for dominance. As a consequence, each monastery or convent in Ireland had its own patron among the hundreds of Irish saints, but supposedly all were obedient to the abbot of Armagh.

Life in most Irish monasteries was challenging physically, intellectually, or both. No one built the stone cloisters typical of continental monasteries in Ireland until the Cistercians arrived in the twelfth century, and even then the Irish preferred their wattle and daub huts to the masonry angles of the European reformers. In the sixth and seventh centuries monasteries included everything from a single round hut built of sticks and mud to a collection of circular and rectangular buildings jostling together inside an encircling wall. Typically, though, every monastic settlement had three features: a church, a patron saint's shrine in or near the church, and a circular enclosure of walls, ditches, or both. Monks combined and augmented these elements in myriad ways. At Reask in County Kerry a rounded stone wall enclosed pairs of connected, beehive-shaped huts of stone in one half of the enclosure; separated by a stone wall through the middle, the other half contained rectangular church buildings. Elsewhere, the entirely earthen enclosure and wooden buildings have disappeared, leaving only cross-inscribed slabs to mark especially sacred spots within the now-lost enclosures—the church doorway, the shrine, a well, or a cemetery. The seventh-century Hisperica Famina (Western sayings), a maniacally ornate Latin poem, described life in a prosperous community of monks. One passage compared a comfortable monastic building with its poorer cousin: "This hollow hall surrounds a clean chamber / which is continually swept with switches of birch, / nor does any kindling pile up there. / Here there is a foul-smelling room / that contains hardened grains of dirt, / nor do the leafy brooms sweep the aforesaid chamber" (Herren 1974, pp. 82–83). Some wealthier settlements, such as Armagh, included special housing for nuns, students, guests, kings and queens, and domestic animals. Beyond the gates of such major monasteries lay their farms, pastures for cattle and sheep, their forests, and perhaps a mill.

Neither stone nor wood-and-earth huts would have afforded much comfort to brothers and sisters, who made do with pleasures of mind and soul. Wherever they lived, Irish monks and nuns, who had never known the Romans as rulers, took up Latin as part of their religious training. Monastic communities organized the study of this entirely foreign language, its grammar, and its major religious texts. They also formed their own idiosyncratic ways of making letters and manuscripts, thus initiating a distinguished tradition of book-learning and production. In addition to Bibles, psalters, and grammar books, Irish monks in the seventh and following centuries produced biblical commentary, prayers, letters, astronomical works, laws, penitentials, and many other texts in both Latin and Europe's earliest written vernacular, Irish. They commemorated the lives of their monastic founders in biographies of saints, beginning with Cogitosus's life of Brigit. They also wrote and rewrote the poetry and stories of their ancestors, the kings of ancient Ireland, and the myths of the pre-Christian era. Only the most prosperous communities could muster the supplies and labor to create a great library, or the gorgeously illuminated manuscripts for which Ireland became known (such as the seventh-century Book of Durrow, the earliest known decorated Irish manuscript); others had to borrow and copy what they could.

The historian known as the Venerable Bede (672?–735), writing in the early eighth century, spread the reputation of Irish scholars, who were already taking in foreign students by then: "The Irish welcomed them all gladly, gave them their daily food, and also provided them with books to read and with instruction without asking for any payment" (Historica Ecclesiastica, III.27, trans. King 1930, p. 485). From large monasteries such as Bangor, where Saint Comgall first ruled, scholars such as Columbanus (543–615) went to continental Europe and Britain to gather and offer Christian learning. (Only men went into exile; religious women were expected to stay home and, at most, teach rudimentary letters to young boys and girls.) Columbanus left a rule and penitentials for the monasteries that he founded in southern France and northern Italy, along with poems and letters to Pope Gregory the Great, among others. His writings reveal not only an elegant style and the passion of a dedicated missionary but also the training in grammar and exegesis that he gained at home early in his career. Columbanus annoyed Gregory with arguments about the date of Easter and so angered local royalty that he found himself on a boat bound for Ireland, composing a mournful poem about his forced departure. But he ended his days as a saintly abbot in Bobbio, south of the Alps. Columbanus was among the first of what would be so many Irish missionary monks that eventually the Latin word for Irishmen, Scotti, came to represent wandering monks of any nationality.