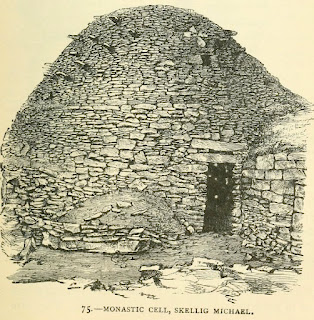 A blog reader contacted me at my previous site to ask about the ‘beehive' huts associated with Irish monastic sites.  In Irish the name clochán, (pl. clocháin) is given to these structures, derived from the word cloch, a stone, it reflects the fact that they are constructed exclusively from stone without the use of mortar. The building technique behind the clochán is an ancient one, which employs the principle of corbelling. Circles of flat stones of ever-decreasing size are successively laid down until a single stone can be used to seal the rooftop. It is a simple but effective method of construction and has been used for centuries, not only in Ireland but in other European countries too. In countries like Italy such huts were built as temporary shelter for nomadic shepherds as they moved around with their flocks. In Ireland they are a particular feature of County Kerry and archaeologist Peter Harbinson [1] relates a story of the scholar Myles Dillon who was an annual visitor to Kerry’s Dingle Peninsula. On one return visit he remarked to his host that he did not remember seeing a particular clochán in the backyard, only to be told that the farmer had built it as a henhouse the previous winter. So this simple structure has a long history in Ireland, one which continues to the present day.

The most famous of the Kerry clocháin associated with monastic sites have to be those of the island monastery of Skellig Michael, off the coast of the Iveragh Peninsula. An Encyclopedia of Architectural and Engineering Feats [2] gives this useful summary of the site:

Skellig Michael, only 44 acres (17 hectares) in area, is dominated by two crags, one of 712 feet (218 metres) and another of 597 feet (183 metres). On top of the latter, reached via steep, winding stairways cut from the rock, there is an artificial platform with a cluster of six circular drystone huts (clochans), two boat- shaped oratories, some stone crosses, and a cemetery – all that remains of a monastery established, possibly by St. Fionán, sometime in the sixth century A.D. and called “the most westerly of Christ’s fortresses in the Western world.” …

The platform was reached by any of three zigzagging stairways – one with 670 steps – from different points at the base of the island. The monks built them by carving the rock and by carrying and placing thousands of flat stones. The terracing at the top was achieved, probably over decades, by constructing, massive drystone retaining walls and filling behind them. On these level places the reclusive churchmen built their huts, using a flat-stone, corbelled technique already thousands of years old. The successive courses of the circular buildings, laid without mortar and with outward-sloping joints to drain the rainwater, gradually diminished in diameter, closing the building to form a pointed dome – a “beehive” dome. The 6-foot thick (almost 2 metre) walls and roof were thus integrated into a single entity, providing living quarters and storage.

Archaeologist Nancy Edwards [3] notes that the six Skellig Michael beehive huts, labelled A, B, C, D, E and F were built in two phases. B, C, D and F were built first and although they are circular on the outside, the inner living space is quadrangular. A and E are larger quadrangular cells which were built later. They are also different in that they have stone projections which may have functioned as support for layers of turf insulation. 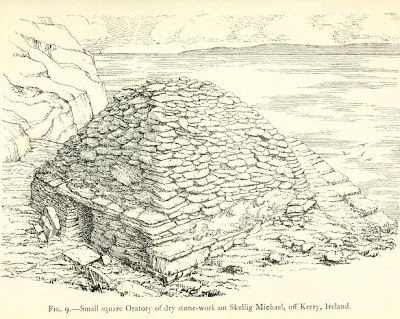 The early Irish monastery did not resemble the later medieval monastery with its regular layout, organized around communal buildings, as a classic archaeological text [4] points out:

At a medieval monastery the visitor quickly becomes familiar with the orderly, almost stereotyped, arrangement of buildings round the cloister – the chapter-house, dormitory, refectory and so on. In early Irish monasteries we are in a different world … A second area of contrast is in the different provision of private and communal accommodation. Benedictine monasticism emphasized the discipline of communal life, in the shared dormitory, dining-room, warming-house and working-room. Early Irish monasteries had certain communal rooms but there was much more emphasis on individual practice and observance, and so we can look for a contrast between individually and communally used buildings.

Most important among the former were the living-cells, occupied by clerics singly or in twos and threes.. It is only in the stony west that cells survive at all commonly, and they are best seen on Skellig Michael, and on other island and coastal sites like Illauntannig, Inishkea, Inishmurray and Killabuonia. . When they survive intact they are dark but still dry and surprisingly spacious: at Skellig Michael cell A is about 16 feet across and 16 feet high, and cell C is 9 and half feet across and 12 feet high. Wall cupboards are provided…


A recent scholarly examination of the Life of Saint Darerca [Moninna] of Killeavy [5] seeks to provide a context for the idiosyncratic layout of early Irish monasteries:

The physical layout of Irish monasteries was also unorthodox and may give us a clue as to the way in which the Irish resolved the ideological contradiction between the devotion to both eremitism and coenobitism. Each foundation would have had a tiny wooden church, a scattering of beehive huts made of stone or wattle just big enough for one or two nuns, and a somewhat larger building for communal gatherings. This complex would then have been enclosed by a series of walls. The juxtaposition of individual cells and communal meeting-place within the womb of the monastic walls indicates that the Irish envisioned their monastic ideal as embracing the dichotomy of the solitary life of a hermit in her cell and the communal life of the monastery, a hybrid of the eremitic and coenobitic symbolized in the architecture…

It is worth remembering though that the beehive hut may have had uses other than as a monastic cell. Peter Harbinson [6] makes this interesting suggestion in a discussion of pilgrimage sites associated with Saint Brendan:

By far the greatest concentration of these clocháin in Ireland is on the Dingle Peninsula, and almost all are found west of Mount Brandon.. the fact that these huts are found in such great numbers to the west of Brandon, yet are very much rarer in other parts of Kerry and elsewhere throughout the country, strongly suggests that these clocháin were the temporary habitations of pilgrims waiting for sufficiently clement weather to climb Mount Brandon. In a similar vein, one can explain those in the Glenfahan area, between Ventry and Slea Head, as temporary shelters for those awaiting the right wind to waft them to the Skelligs. If this explanation is correct, then the clocháin could truly be described as Ireland’s first and oldest surviving bed and breakfast establishments.

So, that’s a selection of views of the Irish beehive hut, an iconic image of Irish monasticism but one which is neither unique to Ireland nor exclusively monastic.

For further reading on Skellig Michael there is an official site which contains a good variety of photographs, reports and articles here. There is also an e-book from the University of California entitled The Forgotten Hermitage of Skellig Michael available to read here.

[5] D. Peters Ausland, ‘Living With a Saint: Monastic Identity, Community and the Ideal of Asceticism in the Life of an Irish Saint’ in K.A. Smith and S. Wells (eds.), Negotiating Community and Difference in Medieval Europe: gender, power, patronage and the authority of religion in Latin Christendom (Brill, 2009), 22.

Thank you Marcella for your new blogs on the Irish Saints. They are wonderful. God bless your work.

Thank you very much indeed for your support.

Thanks for putting this together. Very informative. One thing I noticed though, the archaeologist Nancy Edwards suggests that the purpose of the stone projections is to support turf insulation. That's not what they are for. They are footholds. They allow the builder to have a place to stand and move around as the roof gets taller and tapers in.