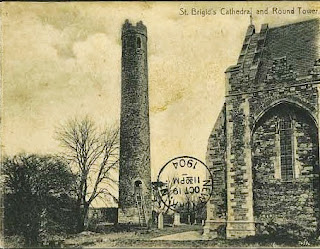 July 18 is the feastday of a ninth-century Abbot of Kildare whom the Irish Annals describe as 'a wise man and learned doctor'. Below is Canon O'Hanlon's entry for Saint Cobhthach of Kildare:

We are informed by Colgan, that a St. Cobhthach, son of Muiredach, was an Abbot at Kildare, and that he was a man of singular wisdom. He appears to have been venerated, on the 18th of July. In an ancient Irish Poem, his merits have been extolled. It is quoted in the Annals of the Four Masters, and it has thus been translated into English:—

"Cobhthach of the Cuirreach of races, intended King of Liphthe of tunics,
Alas! for the great son of Muireadhach. Ah grief! the descendant of the comely fair Ceallach.
Chief of scholastic Leinster, a perfect, comely, prudent sage,
A brilliant shining star was Cobhthach, the successor of Connladh."

How long he ruled there is not recorded, but he probably succeeded Ceallach, son of Ailell, Abbot of Cill-dara, and the Abbot of Iona, who died in Pictland, A.D. 863, or 865.

The death of the present holy Abbot Cobhthach has been assigned to the year 868, or 869.