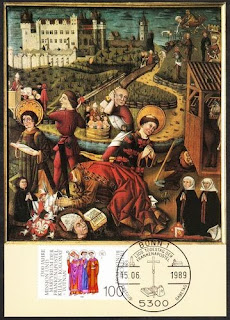 July 8 is the feast of Saint Killian, an Irish missionary saint who, along with his two companions the priest Colman and the deacon Totnan, met a martyr's death in the area of Würzburg in the year 689. The card on the right shows the philatelic commemoration of the 1300th anniversary of this event by the German and Irish postal authorities. The account below has been taken from a 19th-century translation of the work of Father Leonard Goffine (1648-1719), a German Norbertine who provided a commentary on liturgical texts for Sundays and feast days. A number of Irish saints made it into his work, including all three of our national patrons, so it is no surprise to see Saint Killian, one of the most important Irish saints who laboured in Germany, also receive an entry at his feast day. Father Goffine has drawn on the hagiographical accounts of the saint which include such stock figures as a pious nobleman and his evil wife, whose machinations bring about the death of our saint. Saint Killian does not meet his death unprepared for he is forewarned of the grisly event in a vision, the hagiographer then records with relish that the murderers swiftly came to a rather sticky end themselves:

INSTRUCTION ON THE FEAST OF ST. KILIAN, BISHOP AND MARTYR. [July 8.]

ST. KILIAN was born in Ireland of noble parents, who according to the custom of that time had him educated at a monastery, where he was brought up in the fear of God, and his mind at the same time well cultivated in the sciences. He received the habit of the Benedictines, and was ordained priest. In his quiet cell he meditated often on the infinite love of the divine Redeemer who to save sinners became man and died on the cross for us, until the ardent desire was aroused in the saint to carry the message of salvation to those nations to whom Jesus and his love were entirely unknown, and to win their hearts for Christ. With this intention he left his native country, his parents and friends, about the year 685, and with eleven companions who shared his intentions, crossed the sea and safely landed in France, but not to stay there, for Kilian's aim was Germany, where the most abominable idolatry still reigned. He reached the neighborhood of Würzburg, where he settled with the priest Colman and the deacon Totnan, and planted the cross on one of the neighboring hills which to this day is called the Mount of the Cross. The old Franks were devoted to war and the chase, they lived in gloomy forests, dressed in the skin of animals, supported themselves by plunder and the chase, and worshipped, under the name of Hulda, Diana, goddess of hunting; they offered their sacrifices, which were often human beings, to their idols under great oaks. The light of Christianity had, it is true, once penetrated to them from France, but it had been soon extinguished, and the dark night of paganism completely enveloped their beautiful country.

As soon as Kilian and his companions had learned the language of the country, made themselves acquainted with its customs, and had seen what a rich harvest could be reaped by preaching the gospel there, he went to Rome to Cono, who was Pope at that time, to obtain authority to preach the gospel. Cono received him with pleasure, granted his request, consecrated him bishop, and dismissed him with his blessing. In the inclement season of the winter of 687 the saint returned to Würzburg, and immediately commenced the holy work. He preached the word of the Lord to the ignorant with heavenly eloquence, and God blessed his zeal. A great number received baptism. Among these was the Duke of Franconia; named Theobald, who became converted to Christ, and received in baptism the name Gozbert; his subjects followed his example, and in the places where sacrifices smoked on the altars of idols, Kilian had the joy of seeing the cross erected and the purest and holiest offering made to the true God. But his joy was soon overshadowed. Duke Gozbert had married his sister-in-law, Geilana, and Kilian required the duke to separate, as the marriage was unlawful. The duke promised to comply, but his passionate, impious wife would not hear of a divorce, resolved on the death of the saint, and in the absence of the duke who was engaged in a war, hired two barbarians to murder Kilian and his companions. The night before his death, Kilian had a vision, by which he was made aware that his death was at hand. He called his companions, and said: "Let us prepare ourselves for the coming of the Lord, He is at the door." Then they all three prayed and recommended their souls to the Lord, and behold, about midnight the assassins rushed into the saints dwelling. Kilian bravely met them, and with his companions fearlessly received the deathblow; this was in the year 689. To conceal the shameful deed, the bodies of the slain and their priestly garments and the sacred vessels were thrown into a pit; but the just God brought the whole to light. One of the murderers became insane, and ran through the streets of the city in a frenzy, crying out: "O Kilian, Kilian! how horribly thou dost persecute me. I see the sword red with thy blood, hanging over my head" and then, tearing his flesh with his teeth, he died a most agonizing death. The other murderer stabbed himself with his own sword. Geilana became a lunatic and came to a fearful end. The remains of the holy martyrs were found and brought by Bishop Burchard to the Cathedral of Würzburg.

The Introit of the Mass on his Feast reads: The salvation of the just is from the Lord: and He is their protector in the time of trouble. (Fs. xxxvi.) Be not emulous of evil doers: nor envy them that work iniquity. Glory be to the Father &c.

PRAYER OF THE CHURCH. O God, who dost gladden us with the yearly solemnity of Thy holy martyrs Kilian, Colman, and Totnan, mercifully grant, that as we rejoice in their merits, we may be inflamed by their examples. Thro'. &c.


Rev. Leonard Goffine, Explanation of the Epistles and Gospels for the Sundays, Holydays and Festivals throughout the Ecclesiastical Year, to which are added the Lives of Many Saints, (New York, 51st edition, 1880), 797-799.