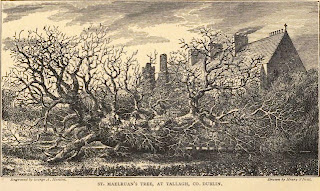 7th July sees the feastday of an important monastic saint - Maelruain of Tallaght. The name of this great abbot is inextricably linked with the movement known as the Céile-Dé, anglicized as Culdees. The received wisdom about the Céile-Dé is that it was a reform movement which sought to restore a stricter ascetic discipline to an Irish church which had grown lax. Contemporary scholars have begun a critical examination of this thesis too, Westley Follett's 2006 study Céle-Dé in Ireland: Monastic Writing and Identity in the Middle Ages, challenges the idea that Céile-Dé was primarily a reform movement at all. The Céile-Dé exerted a certain fascination for some writers at the time of the Reformation who saw them as proto-Protestants standing against the corruption of the Roman church. Romanticism has re-surfaced in the latest wave of 'Celtic Christianity' where 'culdees', like 'soulfriends', are very much in vogue. And no modern 'Order of the Culdees' seems to be complete without at least one leader called Maelruain. So what do we know of the historical Maelruain of Tallaght?

His feastday is attested to in the earliest Irish calendars, not surprisingly as Oengus the martyrologist, was himself numbered among the Céile-Dé. Oengus pays tribute to his old master in the entry for July 7th thus:

"With a great beautiful host, Parmenius'
heavy troop, Moelruain ran to heaven,
splendid sun of the isle of the Gael."

He repeats the sun motif in the Prologue to the calendar:

225. MaelRuain after his pious service,
the great sun on Meath's south plain,
at his grave with purity
is healed the sigh of every heart.

The later Martyrology of Donegal relates a story of the mother of Saint Brendan of Birr in connection with Maelruain's famous monastic foundation:

MAELRUAIN, Bishop, of Tamhlacht, in Leinster. Tamhlacht is between Ath-cliath and Cill-dara. Maelruain is of the race of Eochaidh, son of Muireadhach, who is of the seed of Heremon. Brocseach was the name of his mother.
Mainnsena, the mother of Brenainn, of Biorr, came to Saighir, and she was desirous of going to the island of Doimhle; “Go not,” said Ciaran, of Saighir, “but it is in Tamhlacht thy own resurrection and the resurrection of thy son, Brenainn, shall be.” He died A.D. 787.

Canon O'Hanlon, in his Lives of the Irish Saints, gives a fascinating glimpse into the survival of popular devotion to Saint Maelruain well into the 19th century:

Saint Maolruain or Maelruain, Abbot of Tallagh, County of Dublin

It is greatly to be regretted, that we have so few personal records of a saint, who was so very remarkable in his time, and whose life had such a marked influence on the revival of religion and literature in the early Irish Church. We do not know where he had been educated, although it seems to be a fact well established, that he had been well grounded in a religious and literary training, before he thought of establishing his own very celebrated school. He must have resolved on leading a religious life, when young, and he was probably advanced to holy orders, when he was of an age to assume their obligations...

It is stated, that St. Maelruan founded a church, in honour of God and of St. Michael the Archangel, in the year 769. This, likewise, is the date given for the first erection of Tamlacht-Mailruain, in the Annals of the Four Masters...; and, if we may draw an inference from a Festival set down in its Calendar, the 10th of August was a day on which the holy founder brought to or deposited at that place the relics of venerated Martyrs and Virgins, with suitable rites and ceremonies.

..Besides his other excellent virtues and accomplishments, St. Maelruain is traditionally regarded as having indulged in literary work, and he is credited with having been a poet. Yet of his genuine metrical compositions, we doubt if many of them have been preserved. An Irish poem is said to have been composed by St. Maelruan of Tallagh. A much more important compilation has come down to our times, and it is known as the Martyrologium Tamlactense, or the "Martyrology of Tallaght." It has been supposed, that the conception and authorship of this work were due, in the first instance, to St. Maelruain ; although, it is thought, he received assistance in its preparation, from the celebrated St. Oengus the Culdee, who was a subject and an inmate of his monastery...

One of the eight Ecclesiastical and Religious Rules established in Erinn, and the sixth in chronological order, was that of St. Maelruain. It is known as the general Rule of the Céile-Dé , vulgarly called the Culdees. It contains a minute series of regulations for their lives, their prayers, their preachings, their conversations, their confessions, their communions, their ablutions, their fastings, their abstinences, their relaxations, their sleep, their celebrations of Mass and their other duties... It is said, that Moelruain originally composed his Rule for the Céle-Dé in metre...

It has been stated, in the "Annals of the Four Masters," that St. Maelruain, Bishop of Tamhlacht Maelruain, died, on the 7th of July, A.D. 787. Yet, under the head of Tamlacht, Duald Mac Firbis enters, Maolruain, bishop of Tamlacht, at A.D. 789, and at the 7th of July. According to the Annals of Ulster, Maelruain of Tamlacht, a bishop and soldier of Christ, slept in peace, in the year 791. However, Dr. O'Donovan states, that the true date for his death is A.D. 792. St. Maelruain was interred in his cemetery at Tallagh, and the site of his grave is yet pointed out by the people of that village. For the spot, extraordinary veneration is manifested; nor will the people suffer any corpse to be interred too near it. His festival was kept on the 7th of July, and it was long commemorated by the people with processions. This commemoration appears to have come down from remote times. The Martyrology of Tallagh records, that at the 7th of July, veneration was given to Maolruain, Bishop of Tamlachta. This name appears in the Martyrology of Donegal, also, at the same date, as Maelruain, Bishop of Tamlacht, in Leinster. Tamlacht, says the Calendarist, lies between Ath-cliath and Cilldara; but it should have been observed, not in a direct line. Even, St. Maelruain was venerated in Scotland, as we find him entered at the 7th of July, in the Kalendar of Drummond; from which we further learn, that his life was distinguished, not alone by his virtues, but by miracles. After his death, as we learn from the "Feilire," which was soon composed by his contemporary St. Oengus, the people began to frequent his tomb, and after pious service there, with purity, was " healed every heart's sigh."

A pattern was kept up at Tallagh, on the 7th of July, by the people of the town, and they were accustomed to call it St. Mollrooney's day. Probably owing to their mode of pronouncing this saint's name, the people supposed St. Maelruan was a female, and they show an object called her griddle and her cake, in the churchyard. This information the writer has received from W. D. Handcock, Esq., in a letter, headed 52 Dame-street, Dublin, 26th of November, 1874.

[O'Hanlon's informant went on to publish a book on The History and Antiquities of Tallaght in the County of Dublin, which can be read in full online here and in which he informs us that the pattern, after running uninterruptedly for 1,082 years, was only abolished in 1874. O'Hanlon also gave some further details of the procession on the feast of Saint Maelruain in a footnote elsewhere:

Every year, on the 7th of July, at Tallagh, and from time immemorial, the inhabitants have been accustomed to walk from the adjoining village in procession, bearing a long pole, crowned with natural flowers, to the site of St. Melruan's grave. The standard-bearer carries what is locally called "the garland," seven times in a walking circuit around the grave: then all the processionists return to the village, after prayers have been said at the spot. The pole is carefully set aside, until required for floral decoration the following year. This custom is probably but the remnant of an ancient processional and solemn religious service in memory of St. Melruan. The site of his grave is held to be sacred, and no person is allowed to be interred there. The people are accustomed to measure their family places of interment, as being so many feet or so many yards from the grave of Tallagh's holy patron.]

Where could I locate a copy or pdf of the Rule of St Maelruain? thankyou! God bless.....

Edward Gwynn made a translation in the 1920s. There are pdfs available here: https://diglib.uibk.ac.at/ulbtirol/content/structure/413522