July 5 is the commemoration of yet another of our Irish holy women, about whom we have few actual details. As Canon O'Hanlon explains, however, Saint Etain's feast is well-attested on the Irish calendars, as is the County Roscommon locality where she flourished:

We find only a few indications of this holy woman, and these throw little light on her period. A festival in honour of Etain, virgin, of Tuama noadh, appears in the Martyrology of Tallagh, at the 5th of July. Her name is Eidin or Héidin, according to John O'Donovan, and she is regarded as the patron saint of Tumna parish, in the barony of Boyle, and county of Roscommon. However, the present holy virgin appears to have been more popularly known, under the designation of Etavin. In the Martyrology of Marianus O'Gorman, she is commemorated as the fair Edaina, of full and immaculate virginity, and belonging to Tuaim-Noa, in the territory of Magh-Luire, on the banks of the River Buill, now the Boyle. She is noted, likewise, as Edania or Edoena, Virgin, of Tuaim-Noadh, and her festival is entered by the Bollandists, at this date. Her place is called Tuaim mná in the Annals of the Four Masters, at the year 1249, and this means "the tomb of the woman." At this date, the death of a noble priest, called Mulkieran O'Lenaghan of Tuaim mná, is recorded, while, according to Mr. O'Donovan, it seems to have been the name of that place before a church had ever been there. This virgin descended from the race of Brian, son of Eochaidh Muighmheadhoin, according to the O'Clerys' Calendar.

..This virgin is still vividly remembered at her church of Tumna, in the parish of that name, in the county of Roscommon. It is delightfully and romantically situated on the southern margin of the Lower Lake on the Boyle River, and near where it enters the River Shannon, a little to the north of the present town of Carrick-on-Shannon. The church ruins at this place, and also the grave of St. Eidin, are to be seen... A holy well, called after St. Etain, was near the church called Kill-oscoban. To it, many were accustomed to resort, through motives of devotion, and to obtain spiritual favours, as also to be cured from bodily diseases. The grave of this pious woman is shown in the churchyard, not far from the River Shannon. A tradition exists, in the neighbourhood of Carrick-on-Shannon, that the chapel of Toomna had been built by the family of Lenaghan. The name is still extant in this parish. 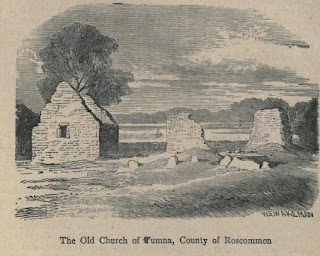 The name of this virgin also occurs in the Martyrology of Donegal, at the same date, as Etavin, of Tuaim Noa, in Magh Luirg, on the banks of the Buill. At the 5th of July, St. Edana or Edaena, in Ireland, and a virgin, is recorded by Rev. Alban Butler. At this date, too, in the Circle of the Seasons, this holy woman is entered, as St. Edana, Virgin, in Ireland. She is also recorded, by Bishop Forbes.

There is a well reasoned view that the town of Stithians in Cornwall (medieval spelling Stethyana, Stediana, Stedyan, Stediane, and Stidianus) was named after St Etain. The annual Stithians Agricultural show is held in early July. Is their any record/legend of her having visited Cornwall?

According to Pádraig Ó Riain her feast is known in Scotland on July 5 and a second one in November. He makes no mention of a Cornish connection.