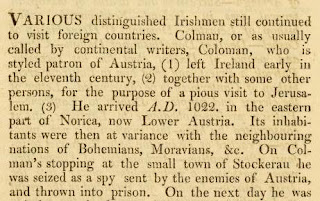 October 13 is the feast day of an 11th-century Irish saint, Colman (Coloman) of Stockerau. I have previously published a paper on his life here, but below is the entry for the saint from Father John Lanigan's Ecclesiastical History of Ireland. Father Lanigan applies his customary sceptical approach to the sources and like many of the Irish writers on the saints doesn't disguise his irritation at the Scottish calendarist Thomas Dempster's clumsy attempt to claim this saint as a Scot, rather than an Irishman. Dempster chose to ignore the reality that in the early Middle Ages Ireland was referred to as 'Scotia' and claimed everyone described in continental sources as a 'Scot' as a native of his own country:

Various distinguished Irishmen still continued to visit foreign countries. Colman, or as usually called by continental writers, Coloman, who is styled patron of Austria, (1) left Ireland early in the eleventh century, (2) together with some other persons, for the purpose of a pious visit to Jerusalem. (3) He arrived A.D.1022 in the eastern part of Norica, now Lower Austria. Its inhabitants were then at variance with the neighbouring nations of Bohemians, Moravians, &etc. On Colman's stopping at the small town of Stockerau he was seized as a spy sent by the enemies of Austria, and thrown into prison. On the next day he was strictly examined, but although he told the plain truth, would not be believed. He was then most cruelly tortured, and at length, on his persisting in declaring his innocence, was hung from an old tree together with two robbers. While his body remained suspended from his gibbet, it continued sound and entire; and it is said that his hair and nails continued to grow. The hay or twig rope, by which his head was fastened, and even the old tree, are stated to have bloomed and revived. These extraordinary phenomena excited great attention, which was ranch enhanced by the circumstance of blood flowing from his body on occasion of a part of his flesh having been cut off for the purpose of being used in effecting a certain cure. It was now concluded, that Colman was a truly holy man, and that he had been unjustly put to death. Accordingly he was honored as a martyr, and his body was taken down and deposited with great pomp in the churchyard of Stockerau. Several miracles are said to have attested his sanctity, and Henry, marquis of Austria, was so moved by them, that he had the body removed to his residence Medlicum, alias Medlica, or Mellica, now Melck. (4) On its removal it was found entire, and was placed in St. Peter's church of that town on the 7th of October A. D, 1015, three years after Colman had been murdered. A Benedictine monastery was soon established there in honour of this saint, which has become very famous and still exists in great splendor. Erchinfrid, who has written the Acts of Colman, (5) was the third abbot of this monastery. He relates, in addition to what has been hitherto stated, several miracles wrought after his death, which it would be too tedious to repeat. He constantly calls him a Scotus, by which appellation, although he does not make mention of Ireland, or name the land of his birth, it may, considering that the Irish were then universally called Scoti, and that they were greatly in the habit of going abroad on pilgrimages, be fairly presumed that Colman was an Irishman. Erchinfrid has nothing about his having been of royal parentage, as some later writers have announced. (6) The name of this saint as a martyr is in the Roman martyrology at 13 October.

(1) Colgan (A.A. SS. p. 105.) calls him apostle of Austria; but there is no reason for giving this title; for, besides Austria having been a Christian country before the arrival of Colman it does not appear that he preached there, or that he had even time to do so. Nor do I find, that Colman was an ecclesiastic. The title given to him by German writers is that of patron of Austria. The most detailed account of him is that by the abbot Erchinfrid, who was contemporary with him, or very nearly so, and which has been published by Lambecius, Commentariorum de Bibliotheca Caesar. Vindohon. Lib, ii. cap. 8. Colman is treated of also by Ditmar and other chroniclers, by Baronius, Annal &c. at A, 1012, and other writers.

(2) According to Erchinfrid's account Colman's departure from his own country must have been only a short time before his death, which occured in 1012. Colgan says, (ib. p. 107.) that he had left Ireland before the close of the tenth century. I wish he had told us, where this information is to be found.

(3) Baronius was mistaken in saying that Colman had been often at Jerusalem. But he had not seen the narrative of Erchinfrid.

(4) Mabillon says (Annal, Ben. ad A, 1017.) that Colman’s body was buried at Melck, which he calls Mezelikim, by order of the then emperor. This is a mistake, grounded on authority inferior to that of Erchinfrid, who positively states, that Henry, marquis of Austria, was the prince, by whose order that was done. He was also wrong in assigning Colman's death to said year 1017.

(5) See above Not. I. The miraculous circumstances relative to Colman's remains are attested also by Ditmar, who was bishop of Mersburg and a contemporary of his, as he died in 1019.

(6) Surius has at 13 October an ode written in honour of St. Colman by John Stabius, historiographer of the emperor Maximilian I. It begins thus:

Then, comes an account of Colman's transactions much in the manner as related by Erchinfrid; for instance,

It was, I dare say, on the authority of this ode that Baronius said that Colman was of a royal family. Dempster, wishing to make Colman, a Scotch prince, fabricated a story of his having been a son of Malcolm I. king of Scotland. To that shameless liar it is sufficient to oppose the silence of Buchanan, who, although he makes mention of more than one son of Malcolm, has nothing about this celebrated St. Colman. Harris, (Writers at Colman of Lindisfarne) remarking on Dempster's assumption, fell, as indeed some others had before him, into a strange mistake, confounding Colman of Austria with the one of Lindisfarne. He did not know that the former was killed in 1012, whereas the latter lived in the seventh century.

Rev. J. Lanigan, An ecclesiastical history of Ireland, from the first introduction of Christianity among the Irish, to the beginning of the thirteenth century, Volume III, (Dublin, 1829), 440-441.

Email ThisBlogThis!Share to TwitterShare to FacebookShare to Pinterest
Labels: Irish saints in Europe, Martyrdom, Saints of the Eleventh Century