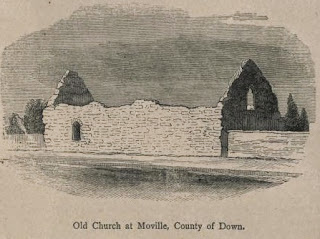 October 17 is the commemoration of Saint Cubretan, a holy man associated with the County Down monastery of Moville. The Martyrology of Donegal records:

Although the passing of various abbots of Moville is recorded in the Irish Annals, they do not note our saint and thus there is no information recorded about the period in which Cubretan the Anchorite flourished. The Anglican scholar, Bishop William Reeves gives this brief sketch of the monastery with which he was associated:

MAGH-BILE - This church, which stood a short way from the head of Strangford  Lough, and about an English mile to the N. E. of Newtownards, was founded by Finian, or Findbarr [fionn barr 'white top'], as he was sometimes called,—" a flavis capillis " (Maguir). The ancient Life of St. Comgall, in the Books of Armagh and Kilkenny, speak of him as " Vir vitae venerabilis S. Finbarrus Episcopus, qui jacet in miraculis multis in sua civitate Maghbile". Marian Gorman styles him "Findianus corde devotus, Episcopus de Mag-bile'... The Annals of Inisfallen refer the death of St. Finian to the year 572. It is calculated that his church was founded about the year 540. The memory of this Finian was so much revered in the diocese of Down, that he was regarded as the patron saint of that part of Ulster.