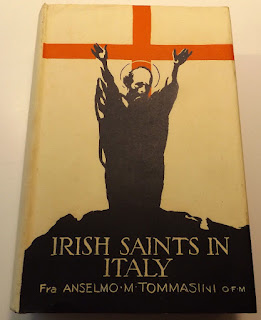 One group of saints in whom I have become very interested are those Anglo-Saxons who came to Ireland to study in monastic schools such as Rath Melsigi. While reading Fra Anselmo Tommasini's classic book on the Irish saints in Italy I came across the following description of them. I note that the author uses the term Irish and Scots interchangeably, as was the custom in the early middle ages:

Early in the seventh century crowds of foreigners began to flock to the schools of Ireland and to those which the Scots opened outside their island. The names of many of these studious foreigners have come down to us. They include "a certain bishop called Agilbert, by nation a Frenchman, but who had then [A.D. 635] lived a long time in Ireland for the purpose of reading the Scriptures", and who later became "bishop of the city of Paris"; Egbert, "who long lived a monastic life ... in Ireland, praying, observing continence, and meditating on the Holy Scriptures"; Wigbert, "famous for his contempt of the world ... who went abroad and arrived in Friesland, preaching the word of salvation for the space of two years successively...but reaped no fruit of all his great labour among his barbarous auditors"; Willibrord, "the holy bishop of the Frissians"; Hewald the Black and Hewald the White, "both piously religious, but Black Hewald was the more learned of the two in Scripture," and both martyred in Friesland; Haemgils the hermit, "supporting his declining age with coarse bread and water"; Chad, later bishop of Lichfield; Ethelhun, who died of the great plague in A.D. 664, and Ethelwin, his brother, later second Bishop of Lindsey; Eahfrid, the correspondent of Aldhelm, and the Northumbrian princes, Oswald, Oswy and Aldfrid. A Pictish bishop also went to study in Ireland but his name has not been preserved, and the number of English attracted to the holy city of Armagh by the renown of its schools was such that one of the three wards into which it was divided was called the Saxon third. Aldhelm, in a letter to his friend Eahfrid, whoever he may have been, but lately returned home from Ireland, refers with some bitterness to the Scotici scioli ... it was the duty of Englishmen to patronise the schools at home. Another writer reckons in thousands the number of persons engaged in teaching in Ireland: Scotti multa millia paedagogorum habebant. The Scots treated their foreign pupils with rare generosity. "Many of the nobility and of the lower ranks of the English nation were there at that time [sc. A.D. 664, the year of the great plague, described in the Irish Annals as buidhe chonnuil]...who forsaking their native island retired thither, either for the sake of divine studies or of a more continent life...The Scots willingly received them all, and took care to supply them with food, as also to furnish them with books to read, and their teaching, gratis".

All these pupils resorted to the schools of Ireland for instruction in the art of asceticism and the learning of Holy Writ. The 'Celtic' churchmen, Patrick, Gildas, Columban, Cummian, Aidan, Adamnán and Sedulius, were all nourished on the Scriptures.

The Latin Biblical texts in use among the Christian communities in Celtic countries were pre-Vulgate versions. St. Jerome's translation was introduced gradually into Ireland and England in the sixth century and made its way under Columban, Cummian, and Adamnán. The Collectio Hibernensis, the Irish collection of canons, was compiled under Roman auspices early on the eighth century.

Texts of the Vulgate belonging to the Irish family were not confined to the island, and manuscripts carried off to their own countries by foreigners, who had gone to study in Ireland, or by Scots emigrants, are found scattered all over the Continent, so that the pure Irish text may be read in Biblical manuscripts from such different sources as Tours, Angers, Le Mans, Epternach, St. Gall, Reichenau, and Bobbio.