The Catalogue of the Saints of Ireland 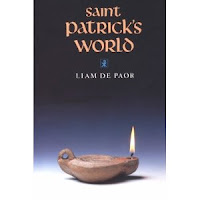 The 'Catalogue of the Saints of Ireland' is a curious document dating from the 8th or the 9th century. It organizes our early native saints into three distinct 'orders' and describes the characteristics of each. The translation of the text below is by Liam de Paor:

The first order of saints was in the time of Patrick. They were all bishops, eminent and holy and filled with the Holy Spirit, numbering three hundred and fifty. They were founders of churches, who worshipped one head, Christ, followed one leader, Patrick, had one tonsure and one liturgy of the Mass, and celebrated one Easter (that is, after the spring equinox). What was excluded from the communion of one church, all excluded. They did not reject the the government and the company of women because, since their foundation was the rock, Christ, they did not fear the wind of temptation. This order of saints lasted through four reigns: that is, from the time of Loeguire son of Niall, who reigned thirty-seven years, and Ailill surnamed Molt, who reigned thirty years, and Lugaid, who reigned seven years. And this order of saints lasted until the end of the time of Tuathal Maelgarb. They all continued to be holy bishops, and for the greater part they were of Frankish and Roman and British and Irish origin.

In a footnote, De Paor also gives some of the dates from the Irish annals for the deaths of the kings mentioned:

The second order of saints was as follows. In this second order there were in fact few bishops but many priests, to the number of three hundred. They worshipped one God as their head. They had diverse liturgies and diverse rules of life, but they celebrated one Easter (that is on the fourteenth of the moon), and they practised one tonsure, from ear to ear. They shunned the company and the services of women and excluded them from their monasteries. This order lasted as far as four reigns, that is, from the end of the reign of Tuathal Maelgarb through the thirty years in which Diarmait son of Cerbel reigned, through the time of the two descendants of Muiredach, who reigned for seven years, and through the time of Aed son of Ainmere, who reigned thirty years. These accepted their ritual of the Mass from holy men of Britain: St David and St Gildas and St Doc. And their names are: Finnian, Enda, Colman, Comgal, Aed, Ciaran, Columba, Brendan, Brichin, Cainnech, Coemgen, Laisren, Lugid, Barra, and many others who were of the second rank of saints.

The third order of saints was as follows. They were holy priests, few of them bishops, to the number of one hundred, and they settled in uninhabited places. They lived on herbs and water and on the alms of the faithful; they despised all earthly goods and they utterly avoided every murmur and distraction. They had diverse rules and liturgies, and even differences in the tonsure: some shaved the top of the head; others wore their hair long. And they varied in their celebration of Easter, some calculating from the fourteenth of the moon, others from the thirteenth. This order lasted through four reigns: through the time of Aed Allan, who reigned just three years; through the time of Domnall, who reigned thirty years; through the time of the sons of Mael Cobo; and through the time of Aed Slaine. And this order endured until the time of the famous great plague. Their names are as follows: Bishop Petran; Bishop Ultan; Bishop Colman; Bishop Aedan; Bishop Lomman; Bishop Senach. These were all bishops, and there are many more. These indeed are the priests: the priest Fechin, Airendan; Faelan; Cummine; Colman; Ernan; Cronan - and many more priests.

The Hierarchy of the Orders

Note that the first order was the holiest, the second holier than the third, the third holy. The first blazed like the sun in the heat of love; the second shone with a paler light like the moon; the third glowed like gold. The blessed Patrick, taught by his heavenly inspiration, discerned those three orders when - in his prophetic vision - he saw the whole of Ireland filled with flames of fire; then afterwards, the mountains as if they were burning, then lighted lamps in the valleys. This is taken from the old Life of Patrick.

Email ThisBlogThis!Share to TwitterShare to FacebookShare to Pinterest
Labels: Lists, Manuscript Sources, Orders of the Saints